Some of those who refused to move out were asked to sign a statement saying they would not seek compensation funds if they were injured or lost family members due to an eruption.

In 1990, an eruption of Kelud killed more than 30 people and injured hundreds. An earlier eruption in 1919 destroyed dozens of villages and killed at least 5,160.

Umar Rosadi, part of a team of 16 scientists monitoring the peak, said the intensity and frequency of the Kelud’s tremors had already exceeded those before the previous eruption in 1990.

“The activity of volcanic tremor is increasing,” he said, adding that magma was 700 metres below the crater and could shoot out if it had enough energy.

Scientists fear that if the magma hits the water inside the crater lake, a giant explosion could occur, sending water, mud and ash careering down the side of the mountain.

Indonesia, which has around 100 active volcanoes spread across 17,500 islands, sits on a seismic belt known as the ‘Pacific Rim of Fire’ – a series of fault lines stretching from the western hemisphere through Japan and Southeast Asia.

The second-highest alert has been issued for Mount Anak Krakatau, which sits in the Sunda Strait between Java and Sumatra islands, and has been spewing ash for several days.

Saut Simatupang, of Indonesia‘s Volcanology and Geological Hazard Mitigation, said increased activity on Anak Krakatau posed a big danger and people have been advised to stay out of a three-kilometre danger zone.

Simatupang also warned that thousands were at risk in West Java from volcanic lahar on Mount Guntur as dams built to collect the material on the slopes start to overflow following heavy rains.

Lahar is a mixture of mud and volcanic lava.

“The volcano is active but there’s no increased intensity. What we are concerned [with] is a possible flow of lahar from the dams,” he said. “We already issued a recommendation for evacuation two weeks ago.”

The 2,249-metre volcano, which lies 200km southeast of Jakarta, is popular with tourists for its hot springs and waterfalls.

Alerts have also been issued for Mount Soputan, in North Sulawesi, which erupted last week spewing columns of ash 1,000-metres high, and Mount Karangetang off the island. 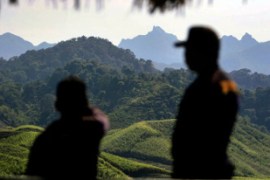 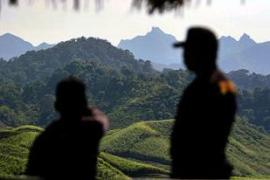