But the Fed also offered a bit of a surprise by saying the risk of inflation was about equal with downside risks to growth.
That statement, coupled with a dissent from Thomas Hoenig, the Kansas City Federal Reserve Bank president, who favoured holding rates steady, threw cold water on expectations that additional reductions in borrowing costs are in store.
More details on the Fed’s thinking are likely to emerge on November 8 when Ben Bernanke, the Fed chairman, testifies before the congressional joint economic committee.
Market reaction
US treasury debt prices fell and stocks initially dropped as traders saw the Fed’s statement suggesting a lower likelihood of further rate reductions.

Stock prices, however, later turned around and the blue-chip Dow Jones industrial average closed up 137.54 points, while the dollar hit a record low against the euro.

US interest-rate futures contracts implied only a 42 per cent chance the Fed will lower rates again at its next meeting in December, down from 64 per cent overnight.
The decision by the Fed to lower the federal funds rate, which governs overnight borrowing between banks, led major banks to lower the prime rate they charge on loans to their best customers.
It could also lead to lower rates on credit cards and car loans for consumers. Most mortgage rates, however, are tied to long-term rates set by the markets. 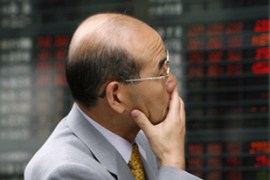 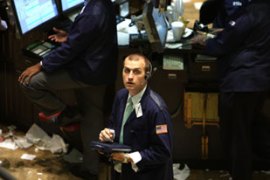 US and Asian stock markets soar after half percentage point cut – the first in four years. 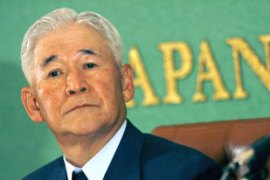 The central bank affirms its independence as politicians voice worry over economy.