However, the court is still weighing five other petitions arguing that Musharraf’s dual role as army chief and president is illegal and that he is ineligible to seek another five-year term.
Musharraf, who took power in 1999, has said he will step down from the army soon after the election if he wins, a move that has sparked protests by the opposition.
Lawyers’ choice
Separately from politicians, Pakistan’s lawyers have opposed Musharraf since he suspended Iftikhar Muhammad Chaudhry, the  country’s chief justice, on March 9.
Chaudhry was later reinstated by the supreme court.
Munir Malik, the supreme court bar association president, said outside the court on Monday: “We have nominated Wajih-udin Ahmad, he is a very respected judge and he will be our candidate for president.”

He said Ahmad would be proposed and seconded by other lawyers, but did not disclose who they were.

Ahmad would likely file his nomination papers on Thursday, the deadline for doing so, he said.
Ongoing arrests
On Sunday, police arrested more than a dozen opposition leaders, saying they want to prevent further protests against Musharraf’s re-election.
Officers started arresting political figures on Saturday night and continued into Sunday, taking 14 people in total.

Most of those taken belong to the party led by Nawaz Sharif, the exiled former prime minister.

The supreme court ruled that Sharif could return to contest elections, but when he did so nearly two weeks ago, the authorities put him on a plane to Saudi Arabia.

The chairman of Sharif’s faction of the PML-N, Raja Zafar-ul-Haq, and acting chief, Javed Hashmi, were among those arrested.

“They want to crush every voice of dissent,” Hashmi said.

“They have confined me for 30 days, but we will continue to raise our voice for the rights of the people of Pakistan, for democracy and against military dictatorship.

“They want power by the use of force, not by the power of the  ballot.”

Hashmi, who was freed by the supreme court in August after serving three years in jail on sedition charges, said that his lawyer would challenge the “illegal detention” in court.

Kamal Hyder, Al Jazeera’s correspondent in Islamabad, reported on Sunday that Hashmi and several other members of the oppostion had been held under police guard at a parliamentary residence.

The guards were not permitted to allow any of those detained to leave. They were allowed to receive visitors. 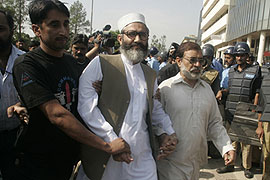 Hyder later said that Hashmi had been transferred to a permanent jail.

“Hashmi … has reportedly been taken to a jail in Rawalpindi. That shows the determination of the government to move against the opposition in a very strong way,” Hyder said.

Ahsan Iqbal, spokesman for the Pakistan Muslim League (PML-N), who is wanted by Pakistani police and currently in hiding, told Al Jazeera that many of the wanted opposition members were planning on going to court on Monday to “cancel government orders for their arrests”.

He described the arrests as “cowardly”, and said the government was in a panic over the opposition plan to resign en masse from parliament once Musharraf’s nomination papers are accepted on September 29.

“They only strengthen our resolve and prove that this is a sham democracy,” Iqbal said.

On Friday, an opposition alliance said its politicians would resign from assemblies on September 29 to deny the presidential vote legitimacy.

The parties said they would protest on the streets and have asked the supreme court to declare Musharraf ineligible to run for another presidential term.

Anti-Musharraf lawyers have said they would blockade Pakistan’s election commission to prevent him from filing his nomination papers. 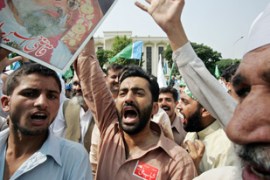