The appointment is being seen as a conciliatory gesture by Myanmar‘s ruling junta which has said it hopes to achieve “smooth relations” with the opposition leader.

However, the regime has previously said that Aung San Suu Kyi’s release is not imminent.

On Tuesday the National League for Democracy, the party founded by Aung San Suu Kyi, gave a cautious welcome to the announcement.

“It is a good sign. It is the way it should be,” NLD spokesman Nyan Win told Reuters. “It shows they seem to have become a little more pragmatic.”

The NLD won a massive election landslide in elections held in 1990, but the military refused to recognise the result.

Speaking at a meeting of the UN Security Council in New York on Monday, special envoy Ibrahim Gambari said he had proposed creating a liaison officer during his talks in Myanmar earlier this month.

“I said to them ‘It’s now time, it’s your country, it’s the future of your country that is at stake, it’s the sovereignty of your people that has to be addressed and the earlier you start talking directly the better,'” Gambari told council members.

During Monday’s closed-door council meeting, China pressed for a watering down of a Western-sponsored draft resolution condemning Myanmar‘s rulers and the recent crackdown.

China is Myanmar‘s biggest trading partner and a key ally.

After nearly three hours of what were described as “constructive” talks the sponsors agreed to come up with a revised text taking into account the amendments.

The US, Britain and France introduced the initial draft on Friday after the council heard a report from Gambari.

The text was to condemn “the violent repression of peaceful demonstrations” by Myanmar‘s rulers, and urge them to “cease repressive measures” and release detainees as well as all political prisoners, including Aung San Suu Kyi.

Diplomats said there was consensus on calling the repression of peaceful protests “unacceptable”, on the need for dialogue and national reconciliation, and for expressing support for Gambari’s mission.

But China, backed by several other delegations, insisted on replacing the word “condemn” by “strongly deplore”, as well as removing a reference to consideration of “further steps”, suggesting instead that the council continues to monitor the situation.

The appointment of Aung Kyi as a liaison between the opposition and Myanmar‘s government was announced in the state-run New Light of Myanmar newspaper on Tuesday.

In a brief official announcement on its front page it said that Aung Kyi had been appointed “minister for relations” to co-ordinate contacts with Aung San Suu Kyi.

The announcement did not say when any first meeting might take place, but the paper suggested that the opposition leaderwould remain under house arrest until a new constitution was approved – seen by most analysts as a dim and distant prospect. 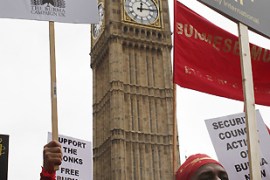 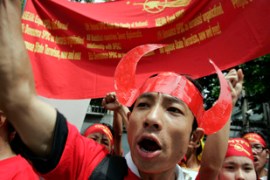 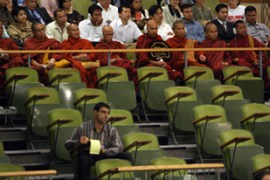