Meeting proposed
Than Shwe, Myanmar’s military leader, told Gambari he will “personally” meet Suu Kyi, but only if preconditions are met, state media reported Thursday.
“In her dealings with the government, Daw Aung San Suu Kyi has called for confrontation, utter devastation, economic sanctions and all other sanctions,” the media quoted Than Shwe as saying.
“If she abandons these calls, Senior General Than Shwe told Mr Gambari that he will personally meet Aung San Suu Kyi,” the media said.
Al Jazeera’s correspondent in Myanmar said state action against pro-democracy advocates has continued after Gambari’s visit.
“In a short space of time after Gambari left, the authorities were conducting more raids, my sources are telling me. In Yangon, a number of civilians were arrested,” he said.
Sources told Al Jazeera’s correspondent that some of the monks detained during last week’s pro-democracy protests had been released but were being closely watched by state authorities.
“I tried to speak to some of those monks. I walked into a monastery and within minutes three minutes I was surrounded by four plain-clothes officers who asked me to leave,” he said.
Next steps
Ban did not give further details of Gambari’s visit or what steps he intended to take next, but said he would meet the UN Security Council on Friday to “discuss closely … what action to take in the future”.

The US has imposed economic sanctions against 14 senior Myanmar officials, including leader Than Shwe, and wants China, Myanmar’s ally, to use its influence to press the military rulers to end the repression.

But China and Russia say the situation in Myanmar is an internal affair and does not threaten international peace and security – a necessary condition for the council to take action.

China, which as a permanent member of the council can veto any resolution, has so far ruled out sanctions and refused to condemn the military government, calling for calm from all sides instead.

In Washington on Wednesday, US senators stepped up demands for tougher action against Myanmar, calling on the Bush administration to press China and India to sever ties with the country.

John Kerry, a Democrat, said as “the two biggest players” in Myanmar, China and India should not have the attitude of “it’d be bad for business to start siding with the pro-democracy forces”.

“China needs to make it clear that it’s unacceptable that those monasteries have been cleared of monks, that people have been loaded into trucks and driven off into God knows where,” he said.

“None of the neighbours seem to have much interest in applying the real pressure that would bring a change.”

A senior US diplomat said the White House was doing its best to press both the Asian giants along with Japan, to use their influence on Myanmar‘s military.

Scot Marciel, a deputy assistant secretary for East Asia, said: “We have been pressing and we will continue to press Beijing to do more.”

Myanmar‘s state-run media has admitted that 10 people died in the crackdown but foreign governments and dissident groups say they believe the toll runs into the hundreds. 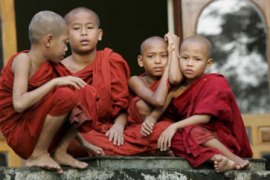 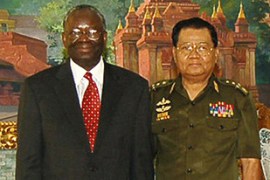 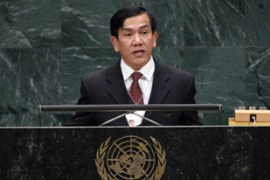