The details of the engagement could not be independently confirmed Rasiah Ilanthirayan, a Tamil Tiger spokesman, could not be reached for comment.
According to the navy, the battle started at 11pm on Thursday as 20 Sea Tiger boats moved towards Pulmoddai, about 40km north of Trincomalee.
The boats were apparently trying to evacuate fellow fighters who had been trapped in the jungle by a government offensive earlier this year.
Naval attack craft cut off the boats, and a lengthy sea battle ensued. An official said military intelligence had intercepted rebel reports and believed Lieutenant-Colonel Nishan Than, a senior Tiger officer, was among those killed.
Unconfirmed casualties Fighting along the front lines separating government-controlled territory and the area the rebels want as their state in the north has increased in recent days, with the military saying on Thursday that 25 separatists, three civilians and one soldier had been killed in two days of fighting across the area.
The casualties could not be independently confirmed, but the separatists said the military was exaggerating the toll.
The military said the battles up and down the front lines began when separatists tried to infiltrate government territory and were driven back.
The Tigers said it was government soldiers who were crossing the lines.
The two sides have been fighting for more than two decades, with the Tigers demanding an independent homeland for minority Tamils in the northeast and the government, dominated by the Sinhalese majority, insisting that the country remain unified under a central government.
More than 70,000 people have been killed in the fighting, 5,000 of them since a 2002 cease-fire broke down nearly two years ago.
Source : News Agencies 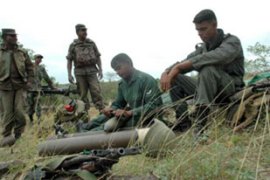 Clashes come as foreign governments are urged to support sovereignty for Tamils. 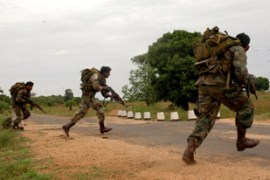