Just hours before the declaration was signed, news came from Beijing that North Korea had agreed to a six-nation plan to dismantle all its nuclear facilities by the end of this year.

In a nod to the nuclear deal, the two leaders agreed to make joint efforts to ensure the plan is implemented smoothly – the first time Kim has personally put his name to denuclearisation efforts.

Kim, in his usual khaki jumpsuit, and Roh shook hands, smiled and clinked glasses of champagne after signing the agreement.

The US still has some 50,000 troops based in South Korea.

Interviewed by Al Jazeera, Brian Bridges, a professor of political science at Lingnan University, Hong Kong, said: “North Korea is in a difficult economic situation … and Kim Jong-il has to face the reality of how to get aid, how to get foreign investment into his country to raise the living standards of his people.

“To do that it requires dialogue and engagement and giving up some of the nuclear weapons or nuclear processes that he has been involved so far.

She said that the first inter-Korean summit in 2000 produced a joint declaration saying the two sides should would meet more regularly and work towards re-unification – but it took seven years before another summit took place.

In a statement the party, which is preparing for presidential elections early next year, said it was “very regrettable” that the two leaders didn’t take any “substantial measures or show their firm commitment to nuclear dismantlement and peace on the Korean peninsula”.

The three-day summit began on a somewhat chilly note on Tuesday, with Kim welcoming his visitor to Pyongyang, then disappearing after exchanging barely a few words. 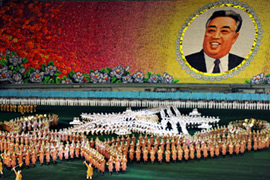 However, the two leaders appeared to warm to each other on as they began formal talks on Wednesday, and in the evening Roh attended a performance of North Korea‘s mass games.

Roh is due to travel back to South Korea later on Thursday, returning by road across the heavily fortified border zone.

On his way back he is expected to stop in the North Korean border city of Kaesong, for a visit to a special economic zone run by both Koreas.

The zone, located 10km inside North Korea, has direct road and rail access to South Korea and was one of the tangible achievements from the first inter-Korean summit in June 2000.