But he admitted that it could be legally problematic.

“That’s just something we need to look into more deeply and talk to department lawyers,” he said.
“I’m told there is some uncertainty whether you could actually make that work or not.”
Military commanders have complained about what are often described as heavy-handed tactics employed by the security workers and voiced uncertainty about their authority over them.
But Gates also said any major limits imposed on the contractors by the Iraqi government would burden US forces or drastically restrict the mobility of US state department officials and other civilians who depend on the private guards.
An indication of how involved private security firms are in Iraq came on Wednesday when Poland‘s ambassador to Iraq was wounded in an apparent assassination attempt.
Blackwater personnel were the ones who evacuated ambassador Edward Pietrzyk after the attack.
There are about 7,300 private security personnel working for the US military in Iraq, mostly guarding important sites.
Thousands more work for the state department guarding officials.
Poor co-ordination
Gates said the contracts were put together in the US, with little information flowing to military commanders in Iraq.

“One obvious suggestion is how do we give [military commanders] greater clarity and more of a role and knowledge about the contracts that are going to be executed” in their region, Gates said.

The report’s recommendation that there be better co-ordination between US commanders and security contractors gave credence to the belief that the private guards often act as “cowboys” with no accountability.
“So the idea is, how do you co-ordinate this in a way that [the command centre] has a better picture of what’s going on in its own area?” Gates said.
The intense scrutiny of private security firms follows the alleged shootings of civilians by Blackwater operatives while escorting a convoy through Baghdad on September 16.
Blackwater criticised
The US and Iraq governments have launched a joint investigation into the incident which has infuriated Iraqis who see the thousands of security personnel as mercenaries acting with impunity.

Blackwater has defended its guards saying they reacted lawfully to an attack on a convoy they were protecting.

While the Iraqi government has said it will wait for the outcome of the joint probe before deciding what to do, Nuri al-Maliki, the prime minister, on Wednesday again questioned Blackwater’s future in Iraq.
“I believe the big numbers of accusations directed against [Blackwater] do not make it valid to stay in Iraq,” he said in Baghdad.
Blackwater, which has about 1,000 people in Iraq, is one of the biggest security firms in Iraq with more than a billion dollars worth of US government contracts – many of them known as “no-bid” contracts.
Source : News Agencies 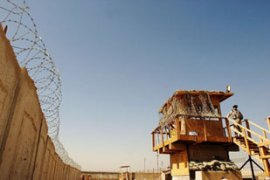 Private contractors accused of involvement in torture and abuse at Abu Ghraib jail.

US firm’s founder claims there has been a “rush to judgment” over alleged killings.

Contractor working for the US in Iraq opened fire first on more than 160 occasions.

US firm to stay but Baghdad and Washington to jointly probe all security firms.