The crimes took place in February 2002 when hundreds of rioters attacked the Muslim residents of Eral village and pursued seven of them, including the two women, as they fled into nearby fields. The men were killed while the women were raped and then killed.
More than 1,000 people, most of them Muslim, were killed in the violence that engulfed the state until May of that year.

The rioting broke out after a Muslim mob was accused of torching a train, burning 59 Hindus alive.

Among those sentenced to life in prison was Chandrasinh Parmar, former local chief of the Hindu nationalist Bharatiya Janata party.

The state government, whose term expires in December, was widely accused of encouraging the killing.

A television sting operation last week showed footage of Hindu activists and politicians boasting about taking part in the massacre and acknowledging state complicity in the violence.

Human rights activists have stepped up demands for speedier justice after the expose was broadcast on Indian television, and called for the removal of the state government.

Hyder Khan, founding member of the US-based organisation Supporters of Human Rights in India, said justice has been denied to the victims of the riots, due to police involvement and an impeded judicial system.

He told Al Jazeera: “The state government does not have the moral authority to be empowered in that state. The president’s rule should be imposed and that team should be removed.

“Anybody who’s responsible should be tried.”

Fifteen cases related to the riots are pending before the supreme court, while Gujarat’s high court has heard arguments over charges of mass murder and abetting rape against 63 people, including Narendra Modi, Gujarat’s chief minister. 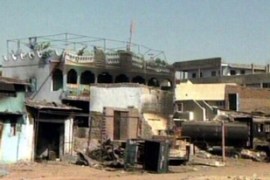