About 27,000 protesters marched nearly 350km from the central Indian city of Gwalior for about a month before arriving in the capital.

The protesters, marching in long lines and waving flags, chanted “Give us land, give us water” as they gathered in the city.

The demonstrators say they have not only been left behind by India‘s recent economic boom, but have also suffered directly with many forced from their land to make way for government-backed economic projects.

“Forty per cent of Indians are now landless and 23 per cent of them are in abject poverty,” Puthan Vithal Rajgopal, an organiser of the march, said.

The new panel, whose recommendations will be non-binding, will include government officials and independent experts on land reforms. 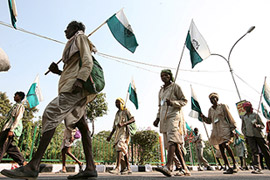 More than 25,000 protesters joined the
month-long march to Delhi [EPA]

Raghuvansh Prasad Singh, the union minister for rural development, speaking to the protesers on Monday, said: “A committee will be formed in a month to look into the state agrarian relations and incomplete land reforms.

“The committee, with a 50-50 membership of the government and social activists will submit its report to the National Land Reforms Council to be formed under the chairmanship of the prime minister”.

Several big projects, including a $12bn steel plant by Posco, a South Korean company, face delays because of stand-offs with farmers unwilling to give up their land.

India‘s vague property laws and endemic corruption add to the the plight of Indian farmers where they are forced off their land by powerful local landowners.

Millions of landless rural poor across India complain there has been little progress in identifying illegal ownership and distributing land equitably despite decades of reforms.