A judicial source said the 16 Europeans would be transferred to the capital N’Djamena “for reasons of security” and because Abeche had no proper court.

They will join a Belgian pilot held there since Sunday for transporting some of the children from the Chad-Sudan border to Abeche.

The French charity Zoe’s Ark said on Monday they were trying to help the children, not abduct them, and that they acted legally.

Reporters Without Borders, a media rights group, has also called for the immediate release of the journalists.

Zoe’s Ark said the operation offered a better life to orphans from Sudan’s war-torn Darfur region, many of whose people have fled over the border to camps in Chad.

The children were allegedly being removed from Chad to be adopted by families in France who had paid up to $8,600 per child to the organisation.

The alleged child-smuggling operation is now under investigation in France and has also been criticised by the UN.

Some of the so-called orphans have now said their parents are still alive, and that they were lured from their villages on the Chad-Sudan border with offers of sweets and biscuits.

The charity insists it was given statements from local tribal leaders that all the children were Darfur orphans with no known relatives.

But Unicef said after interviewing the children – 88 boys and 22 girls, all in good health – that most appear to be Chadian, not Darfuri, and that there was no evidence they were orphans.

The French government has repeatedly condemned the operation and France’s ambassador to Chad said on Sunday those involved would have to face Chadian justice.

The incident threatens to complicate relations between France and its former colony as a predominantly French European Union force prepares to deploy in eastern Chad, to protect civilians there from the violence in neighbouring Darfur. 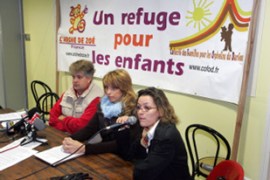