Residents said they had not heard any gunshots early Monday in Swat.
“This is a good thing that the militants have agreed to the ceasefire, and we welcome it,” Arshad Majid, the district co-ordination officer in Swat, said by telephone.

“Both sides were expected to collect the bodies from the mountainous region and a final assessment of the death toll could be known by the evening,” he said.

Fazlullah’s armed supporters have been fighting security forces in Swat since Friday, when the military raided the cleric’s stronghold.

Shah Dauran, Fazlullah’s spokesman, confirmed the ceasefire was in place and that the two sides would exchange the bodies of those killed.

“Later on we will hold negotiations with the government on establishing Islamic Sharia [law]” in the region, he said.

Authorities sent 2,500 paramilitary troops to Swat to fight supporters of Fazlullah, who has launched a Taliban-style Islamisation campaign in the once-peaceful district.

Fazlullah is the leader of the banned pro-Taliban group Tehrik Nifaz-e-Sharia Mohammedi, or Movement for the Enforcement of Islamic Law.

Mohammed Ijaj, an official at Swat Hospital, said they had received 11 injured civilians overnight, and that all were in stable condition.

“We didn’t hear any firing today,” he said on Monday.

Over the weekend, the fighters captured a police post in the nearby village of Charbagh.

Violence first erupted in Swat in July, when armed men mounted attacks on the army after troops stormed the Red Mosque in Pakistan’s capital, Islamabad. 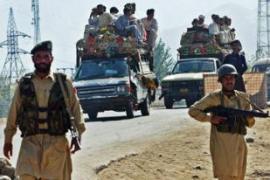 Helicopters back army and police in offensive against supporters of hardline cleric.