He will also have to undergo psychiatric treatment at the prison. Previous diagnosis by experts at Russia‘s main psychiatric clinic had found Pichushkin sane.

A jury found Pichushkin guilty on Wednesday after deliberating for more than two hours.

Pichushkin said on Thursday that he had killed 60 people and that three attempts had failed.

However, prosecutors could only find evidence for 48 murders. The jury also found Pichushkin guilty of three attempted murders.

Most of his victims were killed in Bittsa Park, south of Moscow, from 2001 until his arrest in 2006.

Prosecutors said Pichushkin lured his victims, many of them homeless, alcoholic and elderly, by promising them vodka if they would join him in mourning the death of his dog.

Russia is now observing a moratorium on carrying out the death penalty. 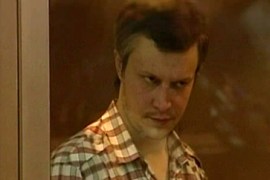 Suspect accused of luring 49 homeless men to violent deaths in a Moscow park.