Brigadier General Kudair al-Timimi from the Baquba police said that 20 people, including a woman and child, were wounded in the early morning attack.

On Sunday, 10 tribal leaders from the Diyala Salvation Council were abducted in Baghdad after a meeting with an adviser to Nuri al-Maliki, the Iraqi prime minister.

The number of tribal leaders kidnapped has been a source of conflict with some agencies reporting 11 missing.

The Iraqi defence ministry said eight of the men were rescued on Monday when soldiers raided the house where they were held.

The ministry said another raid was under way to try to find the tribal sheikhs still missing.

But two government officials from Diyala province said one of those missing, sheikh Modher al-Azzawi, was found dead earlier on Monday.

US forces have blamed a former commander from Moqtada al-Sadr’s Mehdi Army for the kidnapping.

The identity of the victims was not immediately known. 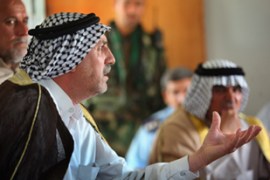