Instead Israel has “changed the way in which such control is effectuated”, the report says.
This includes control over Gaza’s air space and territorial waters, its borders, the movement of goods and people, the taxation system, fiscal policy and the population registry.
“Israel controls Gaza through a kind of ‘invisible hand’, which is hard to see but felt intensely by Gaza residents, who know that their ability to do basic things – buy milk, turn on electric lights, travel abroad – depend on decisions made by Israel,” Sari Bashi, director of the institute and co-author of the report, said in an interview with Al Jazeera.
The report makes the case that despite “disengagement”, Israel never relinquished the control over Gaza that it maintained as an occupying power and so it is still liable for the welfare of its residents according to international law.
Israel completed its “disengagement” from the Gaza Strip, a plan masterminded by Ariel Sharon, the former Israeli prime minister, on September 12, 2005 with the removal of illegal Israeli settlements and permanent military installations from Gaza.
Tel Aviv said this constituted an end to its military governance of Gaza and Sharon declared it “the end of Israeli control over, and responsibility for, the Gaza Strip”, in a speech to the UN.
But Israeli control and closure policies have since grown tighter and more rigorous, and the occupation is far from over, according to Bashi.
“A Gaza university cannot receive visits from a foreign lecturer unless Israel issues a visitor’s permit; a Gaza mother cannot register her child in the Palestinian population registry without Israeli approval; and a Gaza fisherman cannot fish off the coast of Gaza without permission from Israel,” she said.
Bashi says Gisha’s 100-page report, which is based on internal and public Israeli military documents and extensive interviews, “challenges an assumption held by Israelis and even some international policy-makers that Israel’s disengagement plan ended the occupation of Gaza”.
Limbo
After its disengagement from Gaza, the Israeli government’s position has been that Israel is no longer in control of the territory and so bears no legal responsibility for the welfare its residents, leaving them in legal and political limbo.
It is a situation that Bashi says is no longer sustainable.
She said: “They can’t have it both ways. Israel is keeping quiet about its declaration that Gaza is no longer occupied, in part to avoid questions about its continued control over Gaza – control which has contributed to the current humanitarian crisis in Gaza.
“The European community and many in the international community operate on the assumption that Gaza is still occupied, which explains Israel’s control over it. Israel’s position – that it no longer controls Gaza and owes no obligations there – should, I think, spark questions among foreign policy makers and politicians.
“In the current political context, Israel’s position means Gaza is cut off from the West Bank, too.”
Gaza’s main commercial crossing has been closed for more than half the time since disengagement, according to a UN estimate, and as a result only four per cent of Gaza’s harvest has been exported.
The report cites the example of Yunis Abu Shabana, a Palestinian farmer who exports cherry tomatoes and sweet peppers to Europe, as an example of how the closure affects Palestinians.
Shabana said: “Last January, I had 40 tonnes of produce waiting to be transported at Karni crossing … after 20 days of waiting, the produce was destroyed.
“Right now, my workers are not working and I am supposed to destroy the produce that remains in the factories and greenhouses.”
Rafah crossing
In addition, Israel maintains control over Gaza resident’s only passage in and out of the territory – the Rafah crossing.
This has been open less than 14 per cent of the time since June 2006 and its use is restricted to holders of Gaza ID cards – the issuing of which Israel continues to control despite disengagement.

The report examines the cases of Palestinians living in Gaza who “do not exist”, since Israel will not recognise them as residents and issue ID cards or family re-unification permits.

Tens of thousands of Palestinians fall into this category, according to the Palestinian ministry of civil affairs.
One such Palestinian is Mirvant Alnahal, a 31-year-old lawyer and mother of three who entered Gaza on a visitor’s permit in 1994.
“My husband’s ID card says he is married, but the box for ‘spouse’s name’ is blank. My children were born in Gaza to a mother who, officially, does not exist,” she is quoted as saying in the report.
Israeli authorities have refused to extend Alnahal’s permit or issue her residency status in Gaza.
“Since I came to Gaza, I am trapped here. I cannot leave, for fear that I won’t be allowed to return,” she said.
Travel between Gaza and the West Bank has also been completely severed.
The report says these actions, including Israel’s withholding of Palestinian tax revenues, have caused an unprecedented economic and humanitarian crisis in Gaza.
The report concludes that since Israel maintains effective control over the Gaza Strip, Israel continues to owe Gaza’s residents certain obligations under international law, until such time as it cedes complete control over the territory.
Read Gisha’s full report, Disengaged Occupiers: the Legal Status of Gaza
Source : Al Jazeera 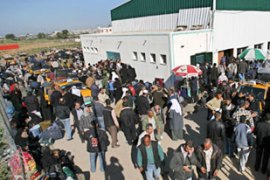 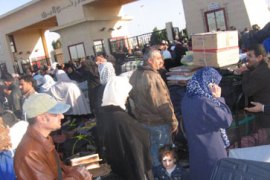 Caught at the crossing 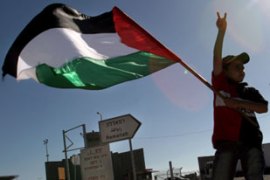 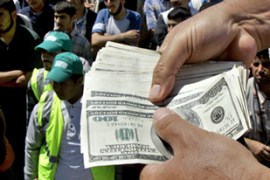 The money is part of about $660 million in customs duties withheld from the Palestinians.