For an outright victory, a candidate needs 45 per cent of the ballots, or at least 40 per cent with a 10-point lead, otherwise a run-off poll will be held on November 25.

Whoever the 27 million registered Argentinian voters pick as the president on Sunday will have to address problems of high inflation and low foreign investment.

In a speech at her final campaign rally in La Matanza, a Buenos Aires suburb, on Thursday, Fernandez focused on Nestor Kirchner’s, her husband and the current president, legacy.

She pledged to “deepen” his economic policies which helped pull Argentina of out a 2002 financial crisis that sent the middle-class into poverty.

“Many of the dreams that we had, we have begun to achieve … I call on you this Sunday for the dreams that are unrealised,” she said, speaking almost entirely of Kirchner’s achievements instead of her own plans.

“The changes that remain are deep and so the people have to be united.”

Omar Khalifa, Al Jazeera’s reporter at the rally in La Matanza, said: “Hundreds of Argentines have been driven to the rally by the bus-load, and many of them have allegedly been paid around 20 pesos to turn up.
“Flags are being waved, people are chanting for her and banging drums,” he said.
“There’s a celebratory atmosphere, but this is quiet considering this is the FV’s final rally before the election.”

Fernandez, 54, has often been compared to the US senator and former first lady Hillary Clinton, but says she does not like the reference.

“Hillary and I have few things in common: We’ve both been senators, lawyers and wives of presidents, but not much else,” she told La Red radio on Wednesday.

Kirchner, whose government has been implicated in a series of corruption scandals, has not explained why he is not running for a second term other than saying he is stepping down because he is tired.

Roberto Lavagna, a former economy minister who was sacked by the president in 2005, has trailed behind Carrio with 10 to 13 per cent support.

Lavagna, in wrapping up his campaign at a low-income housing project, also attacked Fernandez saying, “We don’t know what plans she has. She hasn’t said anything.”

The closest rival to Fernandez is former legislator Elisa Carrio, who is campaigning on an anti-corruption platform.

In closing her campaign, Carrio denounced the “arrogance” of those in power, a clear reference to the Kirchners.

“The Argentina that is coming is not the Argentina offered up by the marketing campaigns of others,” she said. 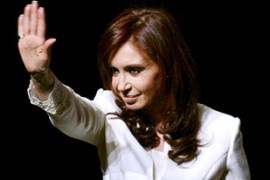 Cristina Kirchner, the wife of the president, announces she is running for his job. 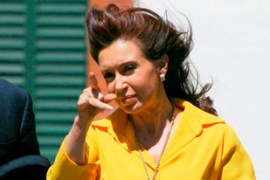