Two women and a child were also injured in the attack on the village, situated 290km from state capital Ranchi.
Border sealed
Singh said the border with Bihar, the state to the north, had been sealed to prevent rebels from fleeing there.
The son of Babu Lal Marandi, a former chief minister of Jharkhand, was in the village for the football match.
“The police security personnel deployed left the place after the football match,” said Singh.
“They did wrong. They should have stayed.”
The attack echoed the assassination of Sunil Mahato, a member of parliament, who was killed by Maoists posing as spectators at a football match in a village in the state in March.
Source : News Agencies 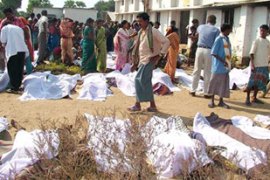 Maoist rebels attack a police camp in the central Indian state of Chhattisgarh.

Maoist rebels attack a police camp in the central Indian state of Chhattisgarh. 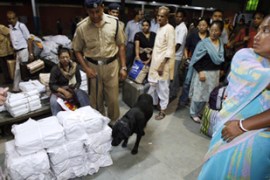 Six people die in a bomb blast on a passenger train in eastern India.