Armenians say at least 1.5 million people were killed from 1915 to 1917 in what they say was a campaign of deportation and murder by the Ottoman Empire.
Turkey bitterly disputes the number of dead and the characterisation of the killings as a genocide.
Judgment questioned
Despite signs that support for the controversial resolution had waned in recent days, the bills Democrat authors – Adam Schiff, Brad Sherman, Anna Eshoo and Frank Pallone – said it still had significant backing in congress.
“We believe that a large majority of our colleagues want to support a resolution recognising the genocide on the house floor, and they will do so, provided the timing is more favourable,” the letter said.
Democrats argued that by refusing to condemn the Armenian massacres as “genocide” the US will encourage impunity for current and future crimes against humanity, for example the killings of civilians in Darfur.
John Boehner, the Republican House minority leader, welcomed the move to pull the bill, but said the whole episode reflected badly on the Democratic leadership and “calls their judgment into question.”
“Let’s be clear: the suffering the Armenian people endured was tragic, there is no doubt about that,” he said in a statement.
“But this 90-year-old issue should be settled by historians, not by politicians.”
Source : News Agencies 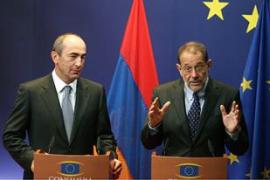