The brainchild of Donald Rumsfeld, former US defence secretary, the Nato Response Force (NRF), was conceived to field troops from a pool of up to 25,000 at five days’ notice and was a key part of efforts to revamp the alliance after the Cold war.

The scale down is seen as a result of the pressure on Nato members to maintain a 40,000-strong force in Afghanistan, a mission some argue is proof that Nato is, in any case, revamping its armies to meet far-flung military challenges.

Alliance sources said last month that the future of the NRF was in question after allies, including the United States, withdrew earlier pledges of troops or equipment, saying they were needed for operations such as Afghanistan or Kosovo.

Nato military chiefs subsequently suggested a “graduated approach” under which only a much-reduced core of the NRF would survive, with the understanding that national contingents could be quickly added as needed.

De Hoop Scheffer said military chiefs would study how such a core NRF might look, but stressed that the move would still allow it to take on the seven original missions – from evacuations to counter-terrorism – for which it was originally conceived.

He conceded the difficulties of such an approach, which could lead to deployments being delayed as countries balked at sending troops to reinforce any core NRF presence.

“I admit that the pressure on forces is very big indeed and that force generation is never an easy process,” he said.

The NRF was declared fully operational at a Nato summit a year ago but has not been deployed on any mission since. Parts of it were used to fly in and distribute relief to victims of the October 2005 earthquake in Pakistan.

There is also intermittent debate within the alliance as to whether it could be used to plug shortfalls in the Afghanistan peace force, something which several nations strongly oppose. 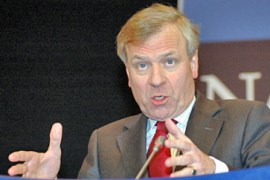 We talk to the head of NATO about the challenges the organization faces.