It has also sought to nudge the military towards holding talks with Gambari.

However. Beijing has also blocked the Security Council from imposing sanctions against Myanmar or taking stronger action.

Gambari, who is on a six-nation Asian tour, has called on China and India to take on a more active role in persuading Myanmar‘s ruling military to end the crackdown.

China is a major supplier of weapons to Myanmar and has come under harsh criticism for its policy of non-interference in the reclusive nation’s affairs.

However Gambari has praised China‘s role for helping get him into Myanmar last month, and for helping to broker meetings between him and General Than Shwe, the head of Myanmar‘s military government, as well as detained democracy leader Aung San Suu Kyi.

“The Chinese have actually been quite helpful,” Gambari said during a visit to India on Tuesday.

Prior to his arrival in China, Gambari said his visit would be to acknowledge what the Chinese have done, “but also to encourage them to do more.” 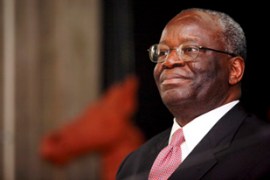