Deaths
Officials said an unidentified civilian had died of burns in Santa Clarita north of Los Angeles on Tuesday, the second reported death after the body of a 52 year-old man was found on Sunday.

Dozens more have been reported injured, including 16 firefighters.

Walls of flame spread quickly from mountain passes to the coastline as dozens of new blazes threatened to engulf more buildings.
Al Jazeera’s Kelly Rockwell, reporting from Rancho Bernardo in South California, said in some areas, the fires were raging out of control.
She quoted one official as saying all firefighters could do was to get out of the way of the fires in one district.

Kirk Humphries, San Diego Fire Captain, said: “If it’s this big and blowing with as much wind as it’s got, it’ll go all the way to the ocean before it stops.”

“We can save some stuff but we can’t stop it.”
Upper hand
Officials were hoping that winds would ease and humidity would rise allowing them to gain the upper hand.
Rockwell said that in some areas, the winds had been starting to die down as of Tuesday evening, but hotter temperatures and fierce wind were forecast.
Hotter temperatures and hot Santa Ana winds blowing in from the desert at up to 105kph were expected to last at least until Wednesday afternoon.
The fires were exploding and shooting embers in all directions, preventing crews from forming traditional fire lines and severely limiting aerial bombardment, officials said.
Thousands of evacuees, as well as horses and family pets, sought shelter at fairgrounds, schools and community centres, with the biggest gathering of up to 10,000 at the Qualcomm football stadium.
Rockwell said some evacuees were staying with church groups and strangers who had opened up their homes.
State of emergency
Arnold Schwarzenegger, California’s governor, declared an emergency in most parts of the state, saying that 68,000 homes were threatened statewide with at least 18 firefighters injured among the 6,000 manning the fire lines.

“We have had three things come together – very dry areas, very hot weather and a lot of wind,” he said. “This makes the perfect storm for fire.”

But he said the response to the fire had been very quick unlike previous calamities.

Schwarzenegger also asked George Bush, US president, to upgrade the wildfires to a “major disaster”, which would trigger federal help.

According to Ron Lane, San Diego county emergency services director, damages from the wildfires are expected to exceed $1bn.

He said: “Based on initial estimates, just the homes damaged will be over $1 billion.”

State officials estimate that the fires have covered at least 1,510 sq kilometres.

Katrina lessons
Early on Tuesday, George Bush, the US president, declared an emergency in the state and authorised the Federal Emergency Management Agency to co-ordinate disaster relief in seven affected counties.

“We send the help of the federal government.” 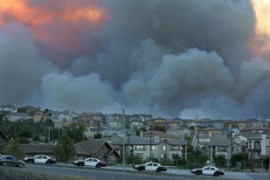