Morocco also signed an accord with French firm Areva covering the extraction of uranium, which Paris said paved the way for co-operation with Rabat on civilian nuclear energy.

A French government spokesman said Morocco also agreed to buy a FREMM class frigate and asked France to modernise 25 of its Puma helicopters and 140 armoured vehicles.

But the deal-making was overshadowed by an indication that Morocco had decided not to buy 18 French Rafale fighter planes, choosing cheaper US-built F-16 jets instead.

“ It has not progressed – you can’t have it all,” a source close to the French president said.

“Will there be other [Rafale orders] in the future? That depends on the financing the Moroccans want to put into it.”

Sarkozy’s relations with Morocco got off to a shaky start following his May election when he chose regional rival Algeria for his first visit outside Europe.

Morocco responded by scrapping the Moroccan leg of his North African tour, a setback for a president who had already made few friends in Africa with his position on immigration.

Sarkozy was accompanied by a delegation of 70 French business leaders aiming to bolster France‘s strong commercial presence in its former colony as US and Chinese investors push into Africa.

Sarkozy travels to Rabat, the Moroccan capital, on Tuesday where he will address parliament, then heads north to Tangier to give a speech on his plans for a union of Mediterranean states.

The initiative could supersede the faltering Barcelona Process, aimed at boosting co-operation among Mediterranean countries and creating a free trade area by 2010, a goal that now looks unreachable.

The plan fits with Sarkozy’s emphasis on curbing illegal migration by working with African countries to improve their economies and create jobs to allow young people to stay put.

Morocco supports the idea, but past efforts to narrow the north-south wealth gap have been held back by weak trade ties, political stagnation and animosity among southern Mediterranean states. 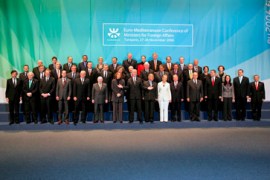