This year’s election will be the first time an incumbent president has faced a credible challenge in Kenya.
Tough challenge

When Kibaki ran in 2002, then-President Daniel arap Moi was constitutionally barred from extending his 24 years in power. Moi won in 1992 and 1997 amid vote-rigging allegations.

Kibaki, 75, had been the front-runner in opinion polls this year until this month, when he lost his lead to his main challenger, former cabinet minister Raila Odinga.

In recent opinion polls, Odinga leads by about 10 percentage points although the volatility of Kenyan politics means the figures could fluctuate significantly.

Kenya‘s estimated 34 million people have witnessed significant improvements over the past four-and-a-half years of Kibaki’s administration, compared with the widespread corruption of the Moi years.

But inflation caused by the growing economy could work in the opposition’s favour. The cost of living has increased and the number of jobs created each year has mostly remained stagnant.

Kibaki’s failure to end graft has also been a grave disappointment to Kenyans. The country also continues to be plagued by violent crime. 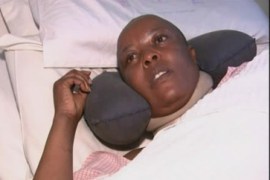