Donald Tusk, the Civic Platform leader and the favourite to be Poland’s next prime minister, wants to turn Poland away from Kaczynski’s focus on rooting out former communists and focus on the economic possibilities of EU membership.
Coalition talks
Tusk said the new parliament would meet on November 5 “and only then serious talks about the political future will be possible”.
Bogdan Zdrojewski, another party official, said the party’s national council will meet on November 10 to decide on potential coalitions.
Short of the 231 needed for a majority, Civic Platform has said it could join with the Polish Peasants Party, which received 8.9 per cent and 31 seats, to form a government.
Another party, the Left and Democrats, offers another possible coalition partner.
Lech Walesa, the former Polish president and a staunch critic of the Kaczynski brothers, said on TVN24 television that the voters’ choice of Civic Platform had “saved our honour”.
“The winning party, I think, will focus on programmes to take advantage of as much as possible in the European Union, and at the same time will improve our image,” he said.
EU-friendly
Hans-Gert Poettering, the European parliament president, told reporters in Berlin that Poland’s election results were “a good signal for Europe”.

Poettering, a member of Germany’s Christian Democratic party which is allied with Civic Platform in the European parliament, said: “One is always happy when a committed European becomes head of a new government.”

Jose Manuel Barroso, president of the EU’s executive arm, said he was confident of “fruitful co-operation” with the next government.
Civic Platform also plans to bring home about 900 troops from the US-led force in Iraq.
The party wants to cap the increase in government spending and run smaller deficits, a step that would bring Poland closer to joining the euro.
Zbigniew Chlebowski, Tusk’s top economic adviser, said the party would seek to link the Polish zloty in a 15 per cent trading band with the euro in 2009, a necessary test of monetary stability before joining.
“Under this scenario, it will be possible to adopt the euro in 2012, which Civic Platform has set as its goal,” Chlebowski was reported by the Dow Jones Newswires as saying.
Much of PiS support came from older and rural Poles who remember communist rule and were less well-positioned to take advantage of the new market economy.
Ironically, Kaczynski’s twin brother, Lech Kaczynski, will hold the post of Poland’s president until 2010.
Source : News Agencies 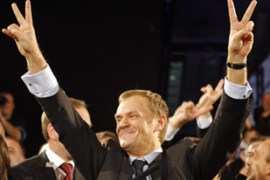 Exit polls indicate victory for Civic Platform which wants to pull troops out of Iraq. 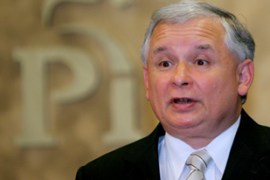 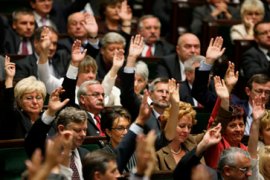 Who is contesting the October 21 parliamentary election in Poland?