Both pilots survived the crash, which happened less than three months after an Adam Air aircraft disappeared with 102 passengers and crew on board.
The European Union banned all 51 Indonesian airlines from its airspace after the accidents, citing safety concerns.
Failings reported
The safety report said the chief pilot’s failure to observe safety procedures had been a contributing factor to the crash.
“The pilot in command did not follow company procedures that required him to fly a stabilised approach, and he did not abort the landing and go around when the approach was not stabilised.”
The pilot “either did not hear, or disregarded the GPWS (Ground Proximity Warning System) alerts and warnings and calls from the co-pilot to go around,” the report said.
However, the transport safety committee refused to attribute the crash to “human error” or “pilot error”.
“The pilot is not 100 per cent at fault, there were flaws in the system that has led to the accident as well,” its report said.
The committee said Yogyakarta airport had a “less than effective” emergency plan.
“The delay in extinguishing the fire and the lack of appropriate fire suppressant agents may have significantly reduced  survivability,” the report said.
Concerns remain that infrastructure and personnel in Indonesia’s aviation industry is not sufficient to deal with strong growth in air travel across the country.
Source: News Agencies 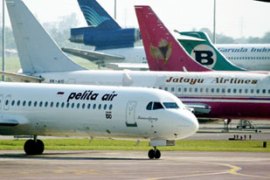 Officials to visit Jakarta to check on safety after Indonesia expresses unhappiness. 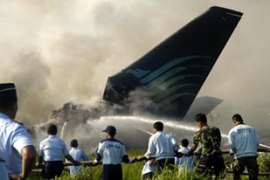 Garuda, which had a deadly crash in March, is deemed country’s safest carrier. 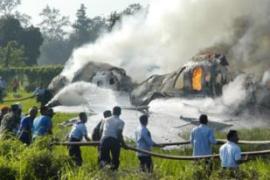 Cockpit recordings show co-pilot wanted captain to go around again instead of landing. 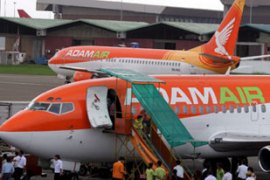