Following the deadly double bomb attack on Benazir Bhutto’s homecoming procession in the southern Pakistani city of Karachi, Al Jazeera spoke to Pakistanis about their reaction to the bombings and what it, and Bhutto’s return, mean for their troubled nation.

And while the difference may hold little significance for most, I think it actually picks up on a very important aspect of Benazir Bhutto’s return and may, in part, explain why hundreds of thousands of people came to Karachi to greet her as she landed.

Zulfiqar Ali Bhutto [her father] is heralded by many as the greatest leader of Pakistan after the initial leadership that led Pakistan to its birth passed away.

The strength that his name and populist message carried can be felt even today. Not only does Benazir know this, she is using it as well and using it to gain sympathy and support in the local population.

It is of no surprise to me that the Pakistan People’s party remains the most popular party of the country and that Benazir got such a tremendous welcome upon her return from an eight-year self-imposed exile.

And yet it is only her first day back and we find her return resulting in the loss of more than 130 lives.

Obviously, Benazir is not loved by all and despite heavy security the procession was attacked.

I see this as the first of many incidences to come. Bhutto has not only alienated but angered the Islamist parties that find their homes in the north and the north-west of the country.

If she complies with the promises she has made to the US, we will see only a further worsening of the security situation in the country and a rapid movement towards what some fear may become a civil war if Pakistan’s marginalised groups are not brought back into the fold of mainstream society and politics.

I see no major change in Pakistani politics as a result of Bhutto’s return.

As many in Pakistan say, the time for a transition to democracy is long gone and what we need is a transformation of the system.

But this can never happen with Musharraf sitting in the post of president. Whether he is in or out of his uniform makes little difference.

I was in my office when Bhutto reached Pakistan but when I watched it at home on television I saw the way the convoy was moving and it was always on the cards that something was going to happen.

As usual only workers and policemen lost their lives. Myself and all my family members were so sad.

In my opinion, the attack on Bhutto’s convoy was pre-planned and it was implemented to win sympathy for Bhutto.

I feel really embarrassed when Bhutto talks about democracy.

This attack has made America more conscious about her and she will now try to make America believe that she is the only and best resort for America’s policy implementations. This will further increase the pressure on Pakistan.

People are not going to support Bhutto, I assure you, and if her party wins the election, there would be great doubt on such an election’s transparency.

We don’t want to see Bhutto or Nawaz [Sharif] in power again because she has a feudal mentality and she will surely ban the independence of the media.

Coming back to her own country after having to deal with the so-called “national reconciliation ordinance” does not mean democracy.
The return of Bhutto will destabilise Pakistan more. We have tried her twice and her chapter should be closed now. We must look for some new faces.

There is credible evidence available that suggests President Musharraf, the local government of Sindh and the ISI [Pakistan’s intelligence services] had all warned Benazir Bhutto about a possible assassination attack by suicide bombers.

Strangely, she ignored all wise advice and preferred to lead the procession after arriving at Karachi airport.

The people of Karachi are sad over the tragic incident and the loss of so many precious lives.

There is a fair perception that this whole deadly episode could have been avoided, had the procession and other political activities been planned and restricted to a timeframe judiciously.

The lack of co-ordination and distrust between government officials and representatives of PPP [Bhutto’s party] may be the key factor.

As almost 90 per cent of the participants came from rural areas of Sindh, NWFP [North West Frontier province], Punjab and Baluchistan, most of the victims were outsiders to Karachi.

Their bodies have been handed over to the group leaders who brought them here.

People are of the opinion that political parties should not endanger lives of their workers and always put them first when organising such activities.

Political workers are the bloodline of any party as their hard work, motivation and dedication help the party to emerge triumphant. Regretfully, their performance and services are usually ignored and discarded when parties reach the top and enter government.

Now, Pakistan is a changed society that has become quite conscious and watchful about foreign intervention.

Benazir has come to Pakistan as a result of a deal sponsored by the US and it is unfair for any party to access power through shortcuts.

Her return on the basis of amnesty deal would lead Pakistan again into the Stone Age.

The welcome show organised by her feudal friends is only to attract international attention towards her, in which she succeeded.

In the foreign media she is now being portrayed as a courageous lady who is fighting against terrorism.

But the truth is oppposite. She lost her credibility as true leader in her last tenure and she is only coming back into power with the help of the US and the ruling army.

The bloodshed from hundreds of innocent lives will be used as a symbol of her unseen and non-existent sacrifices in coming elections.

I think in her way to a power-sharing deal she is allied with the corrupt ex-officers and cruel feudal lords, so one can easily foresee Pakistan’s future. 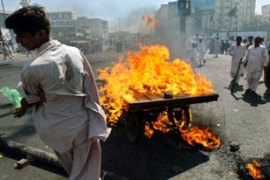