Police told Arroyo that traces of RDX, a component of plastic explosives, had been found at the site.

However, Major Raynold Rosero, a crime scene investigator, told Maria Ortigas, Al Jazeera’s correspondent in Manila, that RDX is also an ingredient used in pharmaceutical and other products such as deodorants.

Arroyo had ordered police to “leave no stone unturned” in their investigation and called a cabinet security meeting on Saturday with police and military officials.

Geary Barias, Manila police chief, said closed-circuit TV footage of the shopping centre was being reviewed in an attempt to identify possible suspects.

Norberto Gonzales, the president’s security adviser, said they had received an intelligence report that Abu Sayyaf was trying to raise funds abroad using the internet site YouTube and the blast could be used as part of this campaign.

“What is more ominous here is they may be planning a bigger attack,” Gonzales said on a radio programme on Saturday.

“They will first show a sample. That means that while the bomb yesterday already was powerful, it is still just a sample.”

However, speaking on local radio on Saturday, Abu Sayyaf denied that they were involved in the explosion.

The Moro Islamic Liberation Front, another Muslim separatist group, also said they were unaware of the blast.

Al Jazeera’s Marga Ortigas said that Antonio Trillanes, a newly elected senator and marine who is in custody facing charges of rebellion, had suggested Gonzalez and Hermogenes Esperon, the Philippines chief of staff, were behind the blast.

She said Gonzalez had scoffed at the allegations.

Abu Sayyaf is said to be linked to the regional Jemaah Islamiah group, which has been blamed for similar explosions in the past, including the 2002 Bali bombings that killed 202 people on the Indonesian resort isle.

A general alert has been issued for the rest of Manila and for the international airport.

Ortigas said more than 2,000 police have been deployed in the city, with checkpoints in public areas such as shopping centre and transport stations.

Manila has largely been spared a spate of bomb attacks by Abu Sayyaf and other Muslim groups that have plagued the southern Mindanao region.

However, in February 2004, more than 100 people were killed when a bomb planted by Abu Sayyaf sank a ferry in Manila Bay. 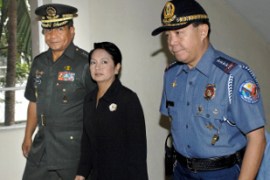 Adviser to Philippines president suggests Muslim separatists may be behind attack.