In the Ferrari showroom off Shanghai’s busy Nanjing Road, business is booming.

At just over $400,000 a throw, getting behind the wheel of one of these Italian motoring legends is beyond the dreams of all but a handful.

Nonetheless, the young woman sales representative says, this showroom alone has already sold more than 50 Ferraris this year, an average of more than one a week and up about 15 per cent on last year.

Shanghai is the epicentre of China’s economic boom and home to a sizeable chunk of China’s 350,000-plus millionaires.

Located at the mouth of the economically vital Yangtze river corridor, it has been nicknamed the dragon’s head.

The city owes its very existence to foreign trade and today Shanghai is still the main entry point for foreign businesses looking to gain a foothold in the world’s most dynamic economy.

“China is very high up on everyone’s priority list,” Laura Mitchelson, head of consultancy Amber Insights and a Shanghai resident for more than 10 years, says.

“If you’re involved in international business, this is not a business environment that you can choose to be in or out of.”

For China’s leaders, Shanghai is the model of what they would like modern China to be.

But the city also holds a place close to their hearts for another reason – as the birthplace of Chinese communism.

In 1921, in a small house in what was then the French Concession, 13 delegates met in secret at the communist party’s first congress. Among them was a young Mao Zedong, the man who would go on to lead the revolution.

From a membership of just a handful over 80 years ago, the communist party is now the biggest political party in the world.

Today the place where Chinese communism began is a museum, located in the heart of the prestigious Xintiandi shopping complex.

Inside the museum, red stars, hammers and sickles and other communist iconography abound, while outside Shanghai’s upwardly-mobile shop for designer accessories and sip lattes that cost more than what millions of China’s peasants make in a week.

It epitomises the contrasts of modern China and the challenges the communist party faces as it wraps up its 17th congress in Beijing this week.

While three decades of economic reforms have lifted millions out of poverty, millions have been left behind.

China today is more deeply divided than ever and the gulf between the rich and poor, between the booming cities like Shanghai and the hundreds of millions barely scratching a subsistence living in the countryside, is growing increasingly wide.

It is hard not to wonder what Chairman Mao would make of it all.

Ni Xinxiang, director of the communist party congress museum, is eager to toe the official line.

“If Mao was alive today and saw all these changes he’d be happy because when he led the revolution his dream was to help people live a good life – now his dream is fulfilled.”

Back in the Ferrari showroom on Nanjing Road, Mei Ming, a 23-year-old engineer, has come to take a look at his own dreams and send a photo to his parents back home.

Like many Chinese he hints at disillusionment with the direction China is going and worries that opportunities to enjoy the fruits of the country’s economic boom are becoming concentrated in the hands of the powerful few.

“China has become more separated between the rich people and the poor people,” he says.

“I don’t want to see the same government and the same leaders. I think the future Chinese leaders should be more open, more realistic and more wise.”

In today’s China having an education is the only way to get ahead, says Mei, but the cost of getting a good education is rising fast and many are struggling to keep up.

For China’s leaders, meeting in Beijing to map out the next five years and beyond, nipping that disillusionment in the bud is their top priority as they struggle.

Their biggest worry is staying relevant – both to the haves and China’s hundreds of millions of have nots.

For the time being though, Mei’s only chance of ever owning his dream Ferrari lies in winning the lottery.

And even if he does eventually win, he says, his first car would be Chinese.

“It’s important that Chinese people support their own car industry,” he says. 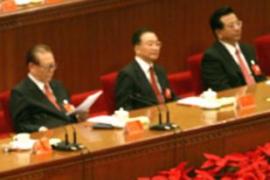 Three of its most powerful politician, including the vice president, will stand down. 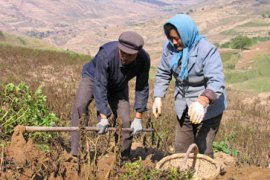 Farmers feel the pinch as booming economy leaves them behind. 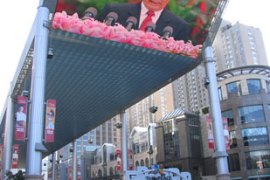