“All crew members have been recovered and they are feeling quite well,” Perminov said at a news conference at mission control.

The Soyuz’s different path on descent was apparently due to a computer glitch and the cosmonauts were subjected to higher than normal gravity load on their descent, Lyndin said.

A similar problem occurred in May 2003 when the crew experienced a steep, off-course landing.

Salvage crews located that spacecraft after several hours of searching. 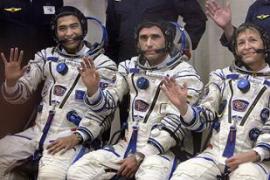