‘Great escape’
According to the ONLF statement, Ethiopian troops had been escorting Abay Tsehaye, a senior ruling party official, when they were attacked.
“Abay Tsehaye and a few senior officers escaped by helicopter after all land routes out of the area were blocked by ONLF forces,” the statement said.
“Thousands of rounds of ammunition and military hardware, including communications equipment, were captured by ONLF forces during the operation,” it added.
“This operation was a direct response to the burning of Caado village recently and the continuing abuses against the people of Ogaden by [government] forces in the Wardheer area,” the statement said.
Crackdown
The army’s crackdown on the region began after an attack by the ONLF against a Chinese oil venture in April that left 77 people dead.
Authorities have imposed a trade blockade on the region since June, with few goods or food permitted into the area, according to Human Rights Watch.
International aid organisations have also been blocked from the region, where the ONLF has repeatedly warned that an “African genocide” was occurring.
Formed in 1984, the ONLF is fighting for the independence of ethnic Somalis in Ogaden, whom they say have been marginalised by Addis Ababa.
The Ogaden region has long been extremely poor, but the discovery of gas and oil has brought some hopes of wealth as well as new causes of conflict.
Source : News Agencies 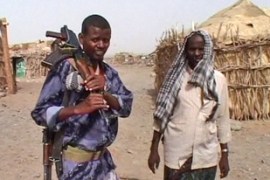 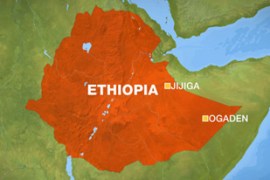 Many killed in Ethiopia attacks

The government has blamed the Ogaden National Liberation Movement. 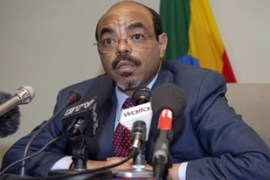 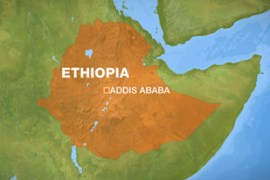 Over 74 people dead and seven missing after a raid on a Chinese-run oilfield.