Asset freeze
Under the latest sanctions, more than three dozen additional government and military officials and their families are now ineligible to receive visas to travel to the US.

Part of the crackdown also includes pressuring the Chevron Corporation, a US oil firm, to pull its money from the country, amid charges from rights activists that the investments aid the military.

Chevron’s operations predate a US trade embargo in 2003.
Other measures unveiled in the sanctions’ package were aimed at stopping the US import of gemstones from Myanmar through third  countries.

On Monday, Bush expressed frustration during a rally in the US state of Arkansas at the lack of international cohesion on Myanmar, saying that “sanctions don’t mean anything if we’re the only sanctioner”.

Previous measures taken by the US treasury department froze assets that the targeted individuals have in US banks or other financial institutions under US jurisdiction.

US citizens were also prohibited from doing business with the individuals.

The president’s plea to other countries is seen as a tacit admission of the limits of US clout with Myanmar’s rulers.

China is the closest Myanmar has to an ally, acting as a key trading partner and arms supplier, and is seen as the linchpin for any international pressure campaign.

It is a major supplier of weapons and has come under criticism for its policy of non-interference in its neighbour’s affairs.
India, jointly fighting rebels with Myanmar along their shared border, has refused to abandon the government, but has urged its rulers to release Aung San Suu Kyi, the detained opposition leader.
She has spent most of the past 18 years under house arrest.

The US move follows weeks of unsuccessful international efforts to get Myanmar’s government to end its crackdown on anti-government protesters.

Last week, Ibrahim Gambari, the UN envoy to Myanmar, said the country’s military rulers could be offered incentives to move towards democratic reforms.

He said one approach could be a combination of strong encouragement of the authorities in Myanmar to do “the right thing” along with some incentives to say “the world is not there just to punish Myanmar”.

Latest testimonies from inside Myanmar belies claims of return to normality. 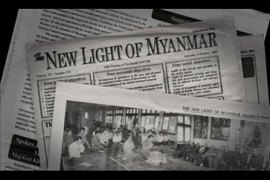