On Wednesday, the Turkish parliament approved a motion authorising military strikes against PKK bases in the north of Iraq at any time over the next year.
“I heard and saw the remarks by [Syrian President Bashar] al-Assad … I could not bear this dangerous way of going over the limit to all the lines,” Talabani reportedly said.
“It would have been better for him to say what the Americans and the Europeans have said that it is better to adopt a political solution despite his understanding of the Turkish stance.”
Assad backed Turkey’s tough stance over Kurdish rebels operating out of northern Iraq during his visit to Ankara three days ago.
Syria also borders northern Iraq.
‘Neighbourly relations’

Mahmoud al-Mashhadani, Iraq’s parliamentary speaker, said the motion was likely to be voted on in the coming days.

Samira Mussawi, a Shia MP, told the AFP news agency that the disagreement stemmed from the fact that while many were angry at the developments in Turkey they did not want their motion to further inflame the situation.

“The parliament condemns the Turkish threats which cannot help in enhancing good neighbourly relations between the two countries,” the original draft text said, according to a copy obtained by AFP.

Al Jazeera’s Hoda Abdel Hamid said most of the MPs had agreed that the PKK should not carry out political or military operations against Turkey from Iraqi soil.

“Chasing the PKK is something most of the MPs are calling for, the Iraqi government is calling for, but how to chase them is the big question,” she said.

Erdogan said in an interview with the Kanal 24 news channel late on Friday that: “Maliki confirmed the following thing: that if there was no result from the talks, we would carry out this operation together.”

However, he also repeated his call for Washington and Baghdad to crack down on the group which Ankara accuses of using bases in northern Iraq to carry out attacks in Turkey, the most recent of which killed 15 soldiers.

“We are tired of being put off with empty words,” Erdogan said. “We need to see some concrete results with regards to the presence of [Kurdish fighters] in northern Iraq.”

Public anger is high in Turkey after recent attacks in the southeast as well as a perception that the United States has failed to back Turkey in its fight with the PKK, even though Washington lists the movement as a terrorist group.

Meanwhile, thousands of Kurds reportedly took to the streets of the city of Zakho in Iraq’s autonomus Kurdish region saying that they would defend their territory.

“This demonstration represents the angry of the Kurdish community toward the green light that was given to Turkish government by the parliament to invade Kurdistan,” he told the Associated Press.

The demonstrators waved the Kurdish flag as well as banners reading: “No, no to the Turkish military incursion. Yes, yes to peace and security,” and “We will be a shield to defend our cities.”

Jelveen Rikani, a 28-year-old government employee who took part in the demonstration, said: “Our peaceful life here is threatened … as war will bring us only problems and humanitarian crisis.” 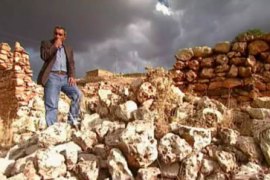 Few have reurned to homes destroyed by the army in the 1990’s.