Highest among those to be punished are four officers who were relieved this week of their commands, including Colonel Bruce Emig, the 5th Bomb Wing commander at Minot, who also has been the base commander since June.

In addition, the wing has been “decertified from its wartime mission”, Newton said. About 65 air force members also had their permission to handle nuclear weapons withdrawn.

The certification process looks at a person’s psychological profile, any medications they are taking and other factors in determining a person’s reliability to handle weapons.

The US military does not usually comment on the movement of nuclear arms but Michael Wynne, the secretary of the air force, said he had decided to make an exception.

Wynne said: “We would not be this upset with ourselves, nor be striving to restore confidence, if this did not involve nuclear weapons.”

On August 29, six cruise missiles armed with nuclear warheads were loaded on to one wing of the aircraft at the Minot air force base in the US state of North Dakota, where they remained overnight.

Six missiles not armed with nuclear warheads were loaded on to the other wing.

The following day, the aircraft flew to Barksdale air base in Louisiana, where the error was discovered, the air force said.

Newton said: “Nothing like this has ever occurred. This was a failure to follow procedures, procedures that have proven to be sound.”

According to Newton, a six-week investigation concluded that the transfer resulted from “a series of procedural breakdowns and human errors”.

He said it was also “an erosion in adherence to weapons handling standards” at both air force bases.

Air force members assigned at the bases’ weapons storage area are said to have failed to examine all the pylons.

A pylon is a finlike device used to attach engines, fuel tanks or bombs to an aircraft wing or fuselage.

During an inspection, a pylon was moved to the aircraft by trailer, but air force personnel failed to verify that it had the right load.

“The crew is required to inspect the munitions before departing. They did not do that,” Newton said.

It was not unloaded until about 8.30pm.

When the nuclear armed weapons were discovered, Robert Gates, the US defence secretary, and George Bush, the president, were notified. 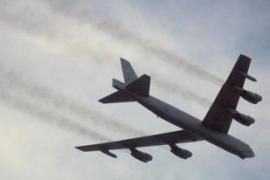