The price of grain has more than doubled in the past 12 months. Last month, wheat reached a record high price of $9.61 a bushel.

Economists says the world’s population is growing too fast and there is not enough land or water to produce enough food to meet the rising demand.

At the same time, yields in Canada, Europe and Australia, the world’s major grain producers, have fallen because of bad weather.

Al Jazeera travelled to Delhi, where the price of wheat has risen by 25 per cent, to see what the impact has been on the poor who rely on such a staple to survive.

Rotis, a type of flat unleavened bread, are vital part of the diet of Reshma and her family.

Wheat is needed to produce them and because the family is poor they are supposed to get it at a subsidised rate. But for several months they have not been receiving their monthly ration.

“I have to buy from the market at three times the price,” Reshma told Al Jazeera. “It’s a struggle, but what choice do I have? My children need to eat.”

Around their neighbourhood in Delhi, it seems that everyone’s ration books tell a similar story of flour rations not being met.

“The shop owners refuse to sell us our ration,” one woman said. “They sell it on the black market at a higher price.”

Al Jazeera visited a ration shop nearby, where the owner denied that any of his grain is diverted for sale at increased prices.

But the government’s own estimates say that more than half the grain allocated to the poor goes missing and officials seem unwilling or unable to stop it. Nearly $8bn worth has been lost in the past three years.

Outside another government shop, a number of women were demanding to know why it was the only one in the market which was never open, preventing them from collecting their rations.

“The law makes it mandatory for these shops to open. The law says that the poor should get their rations, but the law isn’t being implemented,” Santosh Parivartan, one of the protesters, said.

However, a government official from the body that is supposed to ensure adequate distribution of grains to India’s growing population denied that the problems were as big as were being suggested.

“If the studies were correct and half the foodgrains had been stolen, I can assure you there would be a massive demonstration all over the country,” Alok Sinha, managing director of the Food Corporation of India, told Al Jazeera. 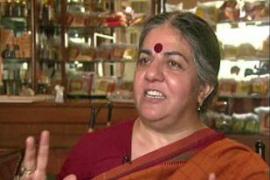