“This is probably the most important case still standing against Abu Ghraib because the cases against the government have essentially failed so far,” Michael Ratner, president of the Centre for Constitutional Rights, said on Tuesday.

“This case represents our last hope for getting some accountability for the torture in Iraq and getting any compensation for the victims.”

The case was filed in 2004 by a dozen former prisoners and the family of a man who died in detention, accusing Titan and CACI of conspiring with US officials “to humiliate, torture and abuse persons” at Abu Ghraib.

Ratner’s group has provided lawyers to the plaintiffs to help with their lawsuit.

The companies will try to get the case thrown out, arguing that they cannot be tried as they were under the control of the army, which in turn says it can only prosecute its own personnel, not civilians.

The grey area in which civilian contractors operate in Iraq was recently highlighted by Blackwater USA, a US company whose role in a Baghdad shoot-out that left 10 Iraqis dead is being investigated.

Under an order passed by the US occupation authority in 2004, security contractors hired by the Pentagon and state department enjoy immunity from arrest under Iraqi law for acts related to their contracts.

Many American judges have also refused to hear cases brought by former Iraqi prisoners, arguing that they have no jurisdiction over alleged crimes committed against foreigners in a third country.

But the plaintiffs’ lawyers are confident the case will proceed.

“This is for the sake of who we are [as Americans]. And if we don’t understand the principles at stake here, if we let them lay low, we have done a disservice to our founding fathers,” Shereef Akeel, a Detroit-based lawyer, said.

“I have this vision of the Iraqis coming here … of putting them in a hotel in Washington DC right across the street from the people who make the decisions … so they can have their day in court.”

Eleven soldiers are serving varying sentences for the abuses at Abu Ghraib prison after the US-led invasion in 2003, while the only officer charged received a reprimand at a court martial in August.

George Bush, the US president, has described the scandal as the “biggest mistake” made by the United States in Iraq.
Source: News Agencies 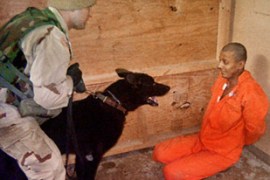 Steven Jordan was the only US officer to face court martial over Iraqi jail abuse. 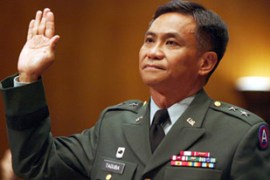