It will provide a more powerful foreign policy chief, more democratic decision making and more say for the European and national parliament.
Jose Socrates, the Portuguese prime minister and chairman of the summit in the Portuguese capital, said: “With this treaty, Europe is showing that the European project is on the move.
“We managed to get out of the blind alley we have been in.”

The more modest treaty is not styled on a constitution and omits any mention of an EU anthem or flag. It retains the key reforms from the original charter.

Jose Manuel Barroso, president of the European Commission, said: “We have said many times that reform is not an end in itself. With these institutions now, we can look after the most important priorities for our citizens.”

In the final negotiations, Italy won an extra seat in the European parliament; Poland won a guarantee that a provision allowing small groups of states to delay EU decisions could be overturned only by unanimity, plus a permanent advocate-general’s job at the European Court of Justice for a Pole.

There were concessions on side issues to Austria, Bulgaria and the European parliament.

Warsaw, which before the start of the two-day summit had threatened
to delay the talks if its demands on new voting arrangements were not met, said its demand had been met.

Poland had fought against the changed voting system at a summit in June, saying it would give too much power to Germany, Europe’s most populous nation, at Poland’s expense.

Some leaders ascribed Kaczynski’s brinkmanship to the fact that Poland is holding an early parliamentary election on Sunday. Jaroslaw Kaczynski, the president’s brother and the prime minister, is hoping for re-election but flagging in opinion polls.

Warsaw‘s main demand was to enshrine in the treaty, or as a protocol, the so-called Ioannina compromise enabling groups of countries just short of a blocking minority to delay a decision for a “reasonable time” – in practice, several months.

The EU has spent a decade agonising over how to reform its institutions to cope with its near doubling in size from 15 to 27 members, and to the emergence of new challenges in foreign and defence policy, energy and climate change.

Gordon Brown, the British prime minister, rejecting domestic pressure to hold a referendum, defended the new arrangements which Britain had demanded to ensure its sovereignty is not undermined by the charter.

“At every point, we have been determined to protect the British national interest and to ensure that the interests of the British people are safeguarded,” he said.

Italy went into the summit insisting on maintaining parity with France and Britain in European parliament seats, despite a reallocation plan proposed by the assembly which would give it fewer deputies based on population size.

The Portuguese compromise, backed by the three main political groups in parliament, gives Italy 73 seats, like Britain, but one fewer than France.

One snag was removed when Austria accepted a European Commission move to suspend legal action against it for five years over quotas on foreign students, designed to stop medical students from neighbouring Germany swamping its universities.

Another was solved when EU leaders agreed to allow Bulgaria the right to spell the common euro currency as “evro” in its Cyrillic language, despite the insistence of the European Central Bank that euro be spelled the same in all 27 EU states. 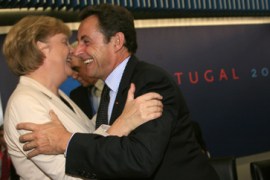 Opening of summit overshadowed by Portugal’s biggest rally in 20 years. 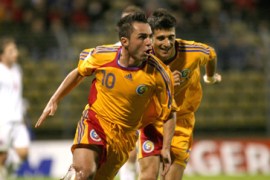 Three more through to Euro 2008

Greece, Romania and the Czechs book their places as Scotland fluff their lines.