Nuri al-Maliki, the prime minister, delayed the hanging of al-Majid until after the Muslim holiday of Eid al-Fitr, which ended on Monday.
Sultan Hashim Ahmad al-Tai, the former defence minister, and Hussein Rashid Mohammed, former deputy operations director of the Iraqi armed forces, were also sentenced to death for their part in the campaign.
All three were convicted of genocide, war crimes and crimes against humanity in June.
Legal delays
Two members of the Iraqi presidential council – Jalal Talabani, the president, and Tareq al-Hashemi, the vice-president – have refused to sign the execution order.

“US forces who hold those indicted must not hand them to any party without permission from the presidential council,” Hashemi said in a statement on Thursday.

It is not clear if al-Maliki believed the three-member presidential council -Adil Abdul Mahdi, the vice-president and third member – were legally required to sign the execution order, as they did not in the case of Saddam Hussein.

Badie Aref, a lawyer who represented Saddam before he was hanged on December 30, 2006, said that al-Maliki’s committee had not convened yet and that any execution of al-Majid would now be illegal.

Badie said: “The committee … is useless because the constitution is clear and must not be misinterpreted.

“They have no right to implement the execution of Ali Hassan al-Majid after more than 30 days according to their own interpretation of the court’s law, to which they must be committed.”

Mirembe Nantongo, a US embassy spokeswoman, said: “Our understanding is that there is still discussion within the government of Iraq about how to proceed with this case and we are awaiting further clarification from Iraqi authorities.”

The Anfal military campaign against the Kurds in 1988 killed an estimated 100,000 people.

Al-Majid, once among the most powerful and feared men in Iraq, ordered the use of mustard gas and nerve agents against the Kurds, who had allegedly worked with Iranians during the 1980-1988 Iran-Iraq war. 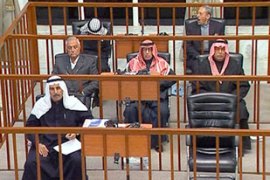