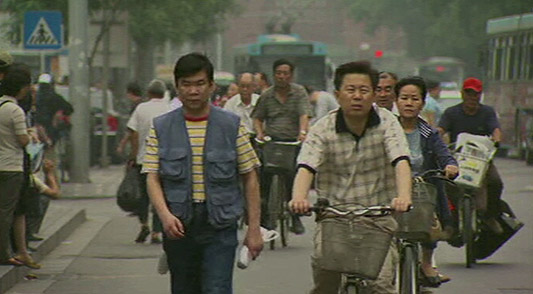 Experts say the widening wealth gap is leading to more crime and peasant riots, as well as
the mass movement of migrant workers seeking jobs across the country

China’s president and delegates at the 17th Party Congress this week have been repeating the slogan that China must build “a harmonious society”.

Hu Jintao has said that a harmonious society should “include democracy … the rule of law … equality and justice”.

Professor Liang Zhu, an expert on Marxist theory and Communist ideology, says on the most basic level, the “harmonious society” idea is “about the relationship between one person and another, you and I, man and society, man and country”.

“These sorts of relationships need to be in harmony. That is – things are not in opposition, opinions not too strong – rather, everything is balanced and peaceful.

But on the ground, Hu’s socio-economic ideology and contribution to Communist thought is a long way off from being realised.

The idea is being pushed by the government because of the negative and troubling effects of China‘s rapid economic development.

The fact is that while there may be a new middle-class, most Chinese remain very poor and very left behind by the economic juggernaut.

The widening income gap, experts say, partly explains the increase in crime and peasant riots, as well as the mass movement of migrant workers seeking jobs across the country.

In fact, everywhere one goes in China, it is a disharmonious society that one sees.

From environmental degradation and pollution to farmers having their land snatched by corrupt local officials, it seems that so little news from China is ever good.

Even the opportunity for desperate, ordinary Chinese to come to the capital to beg officials for help – a tradition going back hundreds of years to the time of emperors – has been snuffed out.

In recent times, people from across the country, travelling sometimes thousands of kilometres to the capital to petition the centre of power to redress injustices back home, have congregated at the Dong Zhuang “petitioners’ village” on the outskirts of Beijing.

There they waited for a chance to bring their cases before officials.

But the same government that calls for a harmonious society demolished the village days before the start of this week’s Communist party congress, saying it needed to build a train station for a high speed link between Shanghai and the capital.

Petitioning might be considered democratic by some, but it is clear the Chinese authorities do not consider it a “harmonious” activity.

Many Chinese do believe – at least conceptually – that a harmonious society is important for a dynamic, changing, and potentially unstable China.

But, of course, a harmonious society means political harmony and stability, stability means no political change and what that means, is a Communist party ever harmoniously in power.