George Bush, the US president, presented the spritual leader with the award despite objections from China, who accuses the Dalai Lama of being a separatist.

Speaking on the day he was awarded the congressional gold medal, the Dalai Lama said he hoped ties between the US and China would improve.
“The consistency of US support for Tibet has not gone unnoticed in China, where this has caused some tension in US-China relations. I feel a sense of regret.

“Today, I wish to share with you all my sincere hope that the future of Tibet and China will move beyond mistrust on a relationship based on mutual respect and recognition of common interests.”

Meanwhile, Bush said that he had explained to Hu Jintao, the Chinese president, and the leadership in Beijing, why he attended the award ceremony.

He said: “They didn’t like it, of course. But I don’t think it’s going to damage, severely damage, relations.

“I have consistently told the Chinese that religious freedom is in their nation’s interest. I’ve also told them that it’s in their interest to meet with the Dalai Lama and will say so at the ceremony.”

China pulled out of a meeting this week where world powers were to discuss Iran, in apparent protest at congress’s plan to honour the Dalai Lama with its highest civilian award.

Tibet has been ruled by China since Communist troops invaded the country in 1950.

China’s government is said to deal harshly with Tibetans who press for greater political and religious freedom.

Ye Xiaowen, director-general of the state administration for religious affairs, said: “The protagonist of this farce is the Dalai Lama.”

The Dalai Lama has lived in exile in India since fleeing his predominantly Buddhist homeland in 1959 after a failed uprising against communist rule.

He supports a “middle way” approach that advocates autonomy for Tibet within China and greater freedom to practice the region’s form of Buddhism.

Beijing’s rhetoric against the Dalai Lama has increased of late, even though the Chinese government is engaged in dialogue with his envoys. 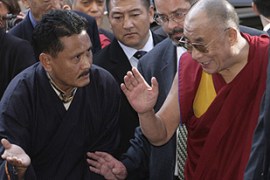