On Wednesday, police also carried out raids in the Cidade de Deus and Vila Cruzeiro slums.

Sergio Cabral, Rio de Janeiro’s governor, said: “Security authorities have a blank cheque to go after drug traffickers. They have my support.”

Since being elected to office in January, Cabral has pledged a relentless crackdown on drug gangs and their control over Rio’s many slums, known as favelas.

Human rights groups accuse the police of widespread corruption and violence, and say they routinely justify killing civilians by alleging they are gang members resisting arrest.

Since July, more than 50 people have died in clashes with police in Rio’s favelas.

The raids on Wednesday were the deadliest since police killed 19 alleged traffickers in the Alemao slum in May.

Rio is one of the world’s most violent cities, with an annual murder rate of about 50 killed per 100,000 inhabitants.

Most of the killings are in the favelas which are widely controlled by armed gangs. 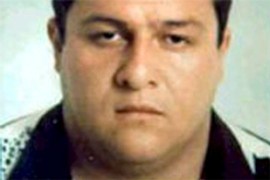 “Don Diego” was on the FBI’s “Ten Most Wanted” list with a $5m bounty on his head. 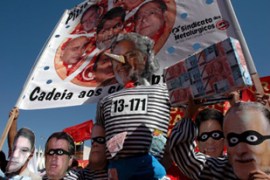 One of president’s closest confidants charged with conspiracy in a graft scandal. 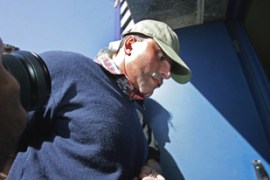 A drug suspect wanted over the shipping of 500 tonnes of cocaine is taken into custody.