The agreement, which has become the subject of an increasingly acrimonious feud in India, allows for peaceful nuclear co-operation and was meant to be a cornerstone of thawing ties between both countries after decades of icy relations.

Late last week, Singh remarked that it was “not the end of life” if the deal collapsed.

The doubts raised then were further magnified late on Monday when he told Bush while touring Africa that “certain difficulties have arisen with respect to the operationalisation” of the deal.

The BJP, the country’s largest opposition party, was angered by the accord, saying it would erode India‘s sovereignty.

The leftists in Singh’s government insist that he must not proceed with steps to finalise the deal until the Indian parliament debates the pact later this year.

Uday Bhaskar, an Indian defence analyst, told Al Jazeera the deal remained alive, even if had been put on hold for a time.

Bhaskar said India’s credibility was at stake if it backed away from the agreement, having already negotiated with the US on the issue.

“India needs to be able to import natural uranium to its civilian [nuclear] program going. The options for India in terms of its energy mix would shrink and its credibility would be diluted.”

The final stage involves negotiating separate agreements with the UN nuclear watchdog and the Nuclear Suppliers Group, a group of nations that export nuclear material.

The White House, however, publicly maintains that the deal is still on the table.

On Tuesday Tony Fratto, a White House spokesman, said they were aware of India‘s local politics but remained optimistic about closing the deal.

“India‘s a thriving democracy. They have work to do, and they may need some additional time on their end to get their part of this deal done,” he said.

“The president is willing and is very understanding that the Indians may need more for this, but no, it’s not dead.”

Bush and Singh first conceived the deal in July 2005 as a way to bring India, a nuclear weapons state, into the international atomic mainstream in return for US atomic fuel and technologies for India‘s booming but energy-starved economy.

The pact has also drawn heavy criticism from US legislators who said it could spark a regional arms race. 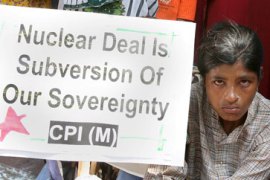 The deal has caused concern in the region amid accusations of double standards. 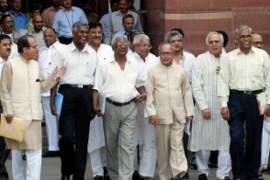 Government and its communist allies agree to meet again to iron out differences.