A scandal over the bid for a government contract is having serious political and economic repercussions in the Philippines.

Romulo Neri, the Philippine economic planning minister, told a senate committee hearing that Benjamin Abalos, the then election commission chief, offered him $4m to endorse the bid by a Chinese telecommunications company, Zhong Xing Telecommunication Equipment Corp (ZTE), for a huge government contract to provide a broadband network link to all government agencies.

Abalos resigned this month in the wake of the scandal.

The case was brought to light by a businessman who lost the bid but he says he blew the whistle because he was sick of the corruption.

He said Abalos offered him $10m to withdraw his own bid.

“So when you’re looking at two-thirds of a kickback and the project size is $300m-plus, that’s a terrifying kickback,” he said.

What is surprising about de Venecia exposing the scandal is that his father is the speaker of the house, a crucial political ally of Arroyo.

In the Philippines, as in many other countries, economic elites and political power converge.

Arroyo has tried to encourage foreign investment projects in the country, such as the multi-million dollar project by US information technology company, Texas Instruments.

“We look at this event as a sure sign that the Philippines has found its niche as one of the best investment destinations in Asia,” she had said.

But failed projects tell a different story, like the $600m state-of-the-art airport terminal that was shut down five years ago during the last stages of construction.

The government said it had to shut it down because of alleged contract irregularities, but German contractor Fraport is challenging the decision in the country’s courts.

The project has come to symbolise the risks of investing in long-term infrastructure contracts in the Philippines.

A big part of the problem is that the bidding process for such contracts is not transparent enough, and it does not look like that is going to improve.

In the ZTE scandal, Arroyo has invoked executive privilege so that she and other top officials will never need to fully explain what really happened, even though Neri says he told her about the bribe offer.

But it could yet prove to be a turning point in the politics and economics of the Philippines. 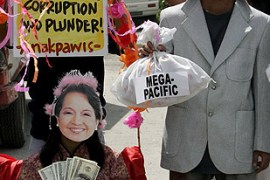