But in advance of Rice’s stop in Egypt, Ahmed Aboul Gheit, the country’s foreign minister, accused some in Israel of trying to “deplete American efforts” to have a real peace agreement between the two sides for the meeting, tentatively set for late November.

“The question is will Fatah be strong enough to contain such a powerful ‘partner’ or will it be just exploited and eroded over time?

“Without addressing these attempts, then we have to seriously think of postponing the conference to another appropriate time,” Aboul Gheit said in a statement late on Monday.

“Rushing into holding the meeting without an agreement over a substantive and positive document may damage opportunities to achieve a just peace.”

Rami Khouri, the editor of Beirut’s Daily Star newspaper, told Al Jazeera there were “big questions about the credibility and efficacy” of the US mediation efforts.

“To get a serious Arab presence at a negotiationg conference in November you need to have a serious conference,” he said.

“The United States is not very credible or serious in what its doing right now. It’s refusing to talk to Hamas and it’s playing games with the Syrians. It’s not really addressing the real law issues.”

In her talks in Jerusalem and the West Bank, she is seeking to bridge wide gaps between Israel and the Palestinians over the declaration to be endorsed in Annapolis, Maryland, in late November that George Bush, the US president, hopes will lead to negotiations for a final settlement of long-running conflict.

Ehud Olmert, the Israeli prime minister, has said he does not see the document as a prerequisite for the conference.

He wants it as vague as possible on critical so-called final status issues, like the borders of a Palestinian state, the status of disputed Jerusalem, Israeli settlements and Palestinian refugees.

At the same time, Olmert hinted on Monday that he is ready to share control of Jerusalem, saying for the first time that Israel could do without controlling some of the holy city’s outlying Arab neighborhoods.

The Palestinians, meanwhile, have said they will not attend the conference without a document that contains details on these matters as well as a specific timeline for their resolution. Arab states share the Palestinian concerns.

No progress was reported.

After her talks in the West Bank city of Ramallah on Monday, Rice urged Israel and the Palestinians to agree on how and when to start formal peace talks.

In one of her strongest statements yet on the issue, Rice declared that creation of a Palestinian state is a key US interest and urged the two sides to drop contentious demands and reach consensus on a substantive joint statement ahead of the international conference.

“Frankly, it’s time for the establishment of a Palestinian state,” Rice told a news conference with Mahmoud Abbas, the Palestinian president, whom she met on Tuesday, the second of an intense four-day Middle East shuttle diplomacy mission.

She said: “The United States sees the establishment of a Palestinian state and a two-state solution as absolutely essential for the future, not just of Palestinians and Israelis but also for the Middle East and indeed to American interests.”

Rice will see both sides again on Wednesday after visiting Egypt. Then she will travel to London to meet Jordan‘s King Abdullah II in a bid to build support for the meeting among skeptical Arab nations. 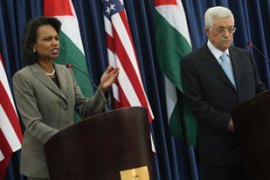 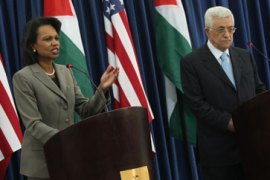 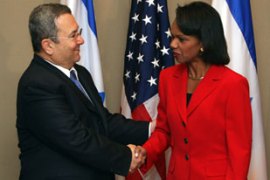