They hold 228 seats in the 450-member legislature – two more than needed to win most votes.

As head of the larger group, Tymoshenko is almost certain to be restored to her former job.

“Let me just say that the election has led to a change in parliament. Power has changed hands in Ukraine and we have achieved the result we had hoped for,” Tymoshenko told reporters after the brief signing ceremony.

“The parliament is new, those in power are new. The democratic team has all grounds to reform all sectors of life so that people feel tangible changes in the country.”

Tymoshenko was President Viktor Yushchenko’s first prime minister after weeks of mass rallies in 2004, which came to be known as the Orange Revolution, swept him to power.

But the two fell out and Tymoshenko was sacked within eight months after her team was hit by infighting, relations with Russia soured and investors took fright at her calls for a broad review of “dubious” privatisations.

The coalition’s first tasks after forming the government are aimed at ending a year of political deadlock and include carrying out a pledge to remove privileges from members of parliament and alter a law which substantially reduced the president’s powers.

Vyacheslav Kyrylenko, head of the pro-presidential Our Ukraine party, also initialled the agreement – to be formally signed at the new parliament’s first sitting.

Their accession to power would turf out of office the president’s rival, Viktor Yanukovich – who lost the 2004 election to Yushchenko but bounced back last year to become prime minister.

Yanukovich’s Regions party, with its power base in eastern Ukraine, remains the largest single group. But, together with its Communist allies, it commands only 202 seats in the chamber.

Tymoshenko said an “Orange” government would give wide powers to the opposition in parliament and would sponsor a law outlining its role.

In the run-up to the accord, she agreed to a call from the president to give some leading jobs to his rivals. 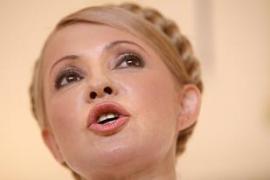