Chinese authorities say the giant Three Gorges Dam will force the relocation of about 4 million more people over the next 10-15 years.

Some 1.4 million people have already been uprooted and spread throughout China to make way for the dam, the world’s biggest hydropower project.

The authorities are also showing a growing recognition of serious environmental problems related to the project.

Those forced to leave their homes will come from outlying districts of the central Chinese city of Chongqing, where the bulk of the dam’s 600-km long reservoir has started to erode the banks of the Yangtze river in many places, the official Xinhua News Agency said in a report late on Thursday.

Xinhua cited Yu Yuanmu, Chongqing‘s vice-mayor, as saying the resettlements would be staggered.

“The resettlements were necessary to protect the ecology of the reservoir area,” Xinhua quoted Yu as saying.

Yu said those relocated would move to neighbourhoods about one hour by bus from Chongqing‘s city centre.

The first two million people would be moved within the next five years, he added.

The announcement follows an unusually frank government assessment last month that China could face a catastrophe if it fails to quickly stop environmental problems such as flooding and erosion caused by the dam.

The dam has been relentlessly promoted as a cure-all for devastating flooding on the Yangtze river, and a source of clean power for a nation attempting to wean itself off its heavy reliance on coal.

Begun in 1993, the Three Gorges dam project, with an overall price tag of $23.6bn, has forged ahead with the backing of the Communist leadership despite complaints about its cost, environmental concerns and the forced relocations.

Xinhua quoted Yu as saying that the dam’s construction had resulted in the removal of people who might have had to leave the area anyway, saying the area was already suffering from overpopulation and was unsuitable for industry. 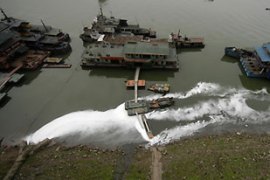