Rights group Amnesty International had said that six activists were arrested over the weekend, including two former student leaders who helped launch the protest movement in August.

Tens of thousands of people in Myanmar risked their lives by marching on the streets to demonstrate against recent price rises and to call for democracy.

Gambari says he wants the active support of regional partners and might return to Myanmar shortly.

He added that any UN efforts would have to be made closely with the Association of Southeast Asian Nations (Asean), which has Thailand and Myanmar among its 10 members.

He said the purpose of a UN statement last week deploring Myanmar’s deadly crackdown on protests in September was “to change the behaviour of the regime, and we believe all those who have influence in that process ought to be engaged”.

The government of Myanmar says it regrets a UN Security Council statement condemning its actions. insisting that the current situation does not affect regional or international security.

Thailand continues to be the biggest importer of Myanmar’s gas in the region and is among the countries criticised by human rights groups for helping to fund the Myanmar military government.

Surayud Chulanot, the Thai prime minister, has questioned whether the UN is capable of influencing Myanmar, and says Thailand is in no position to condemn Myanmar, as Thailand‘s own government was appointed by the army after a coup last year. Surayad Chulanot and and

The EU is expected to ban the import of gemstones, timber and metals from Myanmar, but is not expected to restrict the French energy company, Total, from doing business there.

The EU sanctions are likely to have little impact, as most of Myanmar’s trade is within Asia. 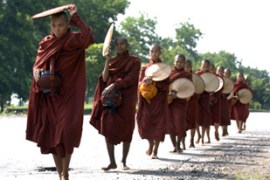 UN sends envoy back to Asia in an attempt to put pressure on military government.