Campaign message
About three million voters are expected to vote between 7am (0700 GMT) and 5pm in about 5,900 voting stations across the west African country.
A total of 2,100 candidates, either representing one of the country’s 32 political parties or running as independents, are competing for one of parliament’s 81 seats.
Togo’s security forces voted on Thursday so they could be free to supervise civilian voting.
Votes posted by the security forces will be counted on Sunday after the rest of the population has finished voting.
Preliminary results will be made public within days of the vote, the Independent Electoral Commission, the body whose job it is to organise the election, says.
The ruling RPT has based its campaign message on what Faure Gnassingbe, Togo’s president, has achieved in the past two years with regard to improving relations between the ruling party and the opposition.
Gnassingbe was first put into power by the military in April 2005 after the death of his father Gnassingbe Eyadema, but he stood down shortly afterwards amid public dissastisfaction with the military.
Two months later he won an election that was boycotted by the political opposition, but his government has since managed to break a long-standing political deadlock.
In order to receive EU aid, Gnassingbe’s administration has to ensure that all registered voters are able to freely select their chosen candidate.
Source: News Agencies 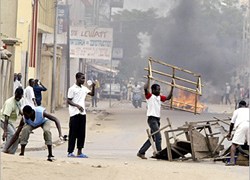 Security forces have fired tear gas and rubber bullets at protesters in the second day of rallies over the election victory of the late authoritarian ruler’s son.

At least three people have been killed after Sunday’s presidential election in Togo, diplomatic sources have said.

Togo’s interim head of state has vowed presidential elections will go ahead and fired a minister who recommended the contrary.

Togo’s government has described clashes ahead of next weekend’s presidential elections as deliberate provocation by the opposition.