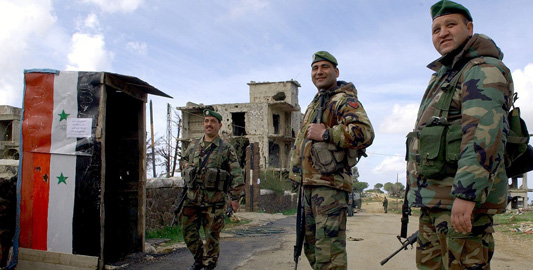 Lebanon has been faced with the task of constructing a new political process since the withdrawal of Syrian troops from Lebanon in April 2005 ended a 30-year presence in the country.

The catalyst for Syria’s exit was street protests provoked by the February 14 assassination of Rafiq al-Hariri, the former Lebanese prime minister.

Thousands of Lebanese visited Hariri’s grave at Martyr’s Square in Beirut over the course of a month and grief turned to anger as allegations surfaced of threats made by Bashar al-Assad, Syria’s president, towards al-Hariri before his death.

Al-Hariri was dubbed “Mr Lebanon” due to his massive involvement in the rebuilding of Beirut after the end of the country’s civil war in 1990 and such influence meant it was natural he would enter the political arena where he served two terms as prime minister.

In 2004, al-Hariri stood down as prime minister citing what he perceived as Syria’s influence over Lebanese politicians by forcing an extension to the presidential mandate of Emile Lahoud, a pro-Syrian figure.

Syria had a deeply entrenched involvement in Lebanon dating back to June 1976, when its troops entered the civil-war ravaged country on the invitation of Suleiman Franjieh, a Maronite Christian who was president at the time.

The Syrian army ostensibly entered its southern neighbour to aid Christian militias, who were fighting a largely Muslim left-leaning alliance.

Syria’s aid to the Maronites was not too surprising, given the pan-Arab climate that was prevalent at the time, and several Arab countries were concerned a socialist Lebanon would destabilise the region.

The Muslim-left groups, who were on the verge of winning the war before Syrian troops entered Lebanon, were quickly pushed back.

Throughout the 1980s, Syrian forces battled a variety of Lebanese militias in a civil war where allegiances were constantly shifting. They also fought Israeli troops who entered Lebanon on two occasions, in 1978 and 1982.

When the Document of National Reconciliation was signed in Taif, Saudi Arabia, in 1989, many believed that Syria would withdraw from the country.

Most understood that the document called on Syria to pull its troops back to Lebanon’s Bekaa valley two years after reforms to Lebanon’s constitution.

Syria had a different interpretation of the Taif accords. Damascus said it would pull back its troops two years after an end to confessional politics in Lebanon – a system of politics where power is accorded along religious lines.

Lebanon had been run on such a system since the country’s national covenant of 1943 and it was extremely unlikely the character of Lebanese politics was going to change in the near future.

Syria’s interpretation of the Taif Accord was given valuable support by the US in 1991 as it sought regional allies for its operations against Iraq.

The relationship between Syria and Lebanon was deepened when both countries signed the Treaty of Brotherhood, Co-operation and Coordination in May 1991. It led to the formation of bilateral executive, defence and economic committees.

By the mid-1990s, Syrian influence was at its peak, with Lebanon’s security and military forces controlled by groups sympathetic to Damascus.

Hafez al-Assad, Syria’s president, died in 2000 and Western governments were confident his son Bashar al-Assad would initiate reforms. There were early signs he was willing to make changes.

However, such reforms were effectively stalled by the old guard within Syria’s security forces, who had remained loyal to the ideas of Bashar al-Assad’s late father.

In September 2004, the UN Security Council issued resolution 1559, which called for the exit of all foreign forces from Lebanon and the disarmament of all Lebanese and non-Lebanese militia groups operating inside the country.

The resolution’s call for the exit of all foreign troops was a veiled reference to Syria. Against this background, Rafiq al-Hariri, Lebanon’s prime minister, made clear his intention to oppose Syrian-backed parties in the 2005 parliamentary elections.

When al-Hariri was killed in a massive blast on Beirut’s Corniche on February 14 2005, Syria’s grip on Lebanon began to loosen as thousands of Lebanese vented their anger at the assassination.

Yet despite the overwhelming calls for Syria to leave, many Lebanese were also thankful towards Syria for their involvement in the country. They believed Syria had acted as a stabilising force.

Given that Lebanon possesses 18 different religious groups and a sizeable Palestinian refugee community, many people felt Syria deserved praise for preventing Lebanon from breaking up.

A United Nations investigation into the Hariri assassination has not yet led to a final judgment on who carried out the killing. However, Detlev Mehlis, the first chief of the special investigation, reported a general lack of co-operation from Syrian security chiefs and their Lebanese allies.

Serge Brammertz, the current head of the investigation, has maintained a careful silence as the inquiry continues.

The UN’s agreement to hold a international tribunal to try suspects in accused of involvement in al-Hariri’s killing has put further pressure on Syria as have accusations that Damascus has been involved in a series of high-profile assassinations of politicians and journalists perceived as anti-Syrian.

Although it has left Lebanon, Syria still has allies in the country. Emile Lahoud, Lebanon’s president, is pro-Syrian and the Shia group Hezbollah, believed to be funded by Iran, also shares broad strategic aims with Syria.

The issue of the Lebanese presidency is just one of the facets in the current political deadlock between Lebanon’s pro-Western majority alliance and the largely pro-Syrian opposition, of which Hezbollah is a key member.

Despite a November 25 deadline for a new Lebanese president to be elected, the two political factions have not yet reached a decision on a consensus candidate.

While the ruling coalition of parties in Lebanon known as the March 14 movement is keen to replace Lahoud with a president who is less close to Damascus, Hezbollah remains concerned that the March 14 is trying to install a pro-US figure.

Whoever is finally installed as Lebanon’s president will have to negotiate competing pressures for the country to be open to both Western and Syrian influence – while somehow forging a uniquely Lebanese future.