The prime minister was considered the favourite but appeared nervous during the one-hour televised debate and at a loss to demonstrate the achievements of his government despite a booming economy.

Tusk has complained that state media favour Kaczynski and his twin brother Lech, the Polish president, and took advantage of a rare appearance on state television to criticise what he calls the Kaczynskis’ unfulfilled promises and a combative foreign policy.

A snap poll among 13,000 readers of a leading internet portal, gazeta.pl, showed that 90 per cent believed Tusk had won.

“Tusk won hands down. He dominated this debate and the prime minister [Jaroslaw Kaczynski] did not retain the initiative for one moment,” Marek Migalski, a political analyst, said.

“This is likely to influence undecided voters but may also convince some Law and Justice voters to switch sides.”

Analysts said Tusk defied his lacklustre image with a confident and relaxed manner.

“Where are the 3 million homes?”, Tusk asked at the start of the debate, referring to Law and Justice’s promise to build homes for poorer Poles.

“There were supposed to be 3 million homes and what we’ve got are homes which cost 3 million.”

He accused Kaczynski of damaging Poland’s relations with Germany and pushing millions of Poles abroad with social conservatism and a failure to pursue economic reform.

Kaczynski countered by saying his opponent would be soft on corruption and cater only to the rich.

They arguments that have dominated his party’s campaign and echo the last election in 2005 when it marginally beat the Civic Platform.

“We have to prevent the return of liberal economic policies which were aimed only at the affluent part of society,” Kaczynski said.

Tusk said only further liberal reforms could lure back millions of young Poles who took advantage of EU membership to work abroad.

“Two million Poles chose a liberal economy in the two years that you have been in power,” he said. “Unfortunately, in the UK, Ireland, Spain and the Netherlands.”

Poland’s parliament voted last month to dissolve itself and force elections two years ahead of schedule as a way of ending persistent political turbulence.

Since winning 2005 elections, Kaczynski’s party has ruled either as a weak minority government or in coalition with populists and the far-right. 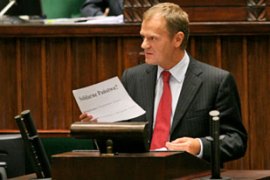 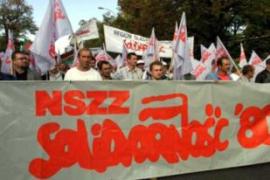 Poland battles to save Gdansk yard 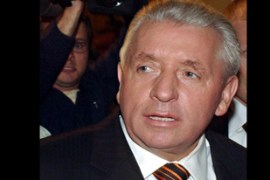 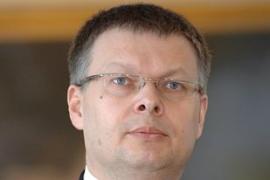