Resistance movements have been active in Iraq since the US-led invasion in 2003 but the formation of the council means that several armed groups, whose hierarchy had remained largely incomprehensible, now have a political structure.
But it was not immediately clear to what extent the council, which promises to resist “all forms of occupation”, would negotiate with US forces.
The council has criticised sectarian violence and attacks on civilians, but it has not rejected armed resistance outright.
‘Good relations’
In a 14-point statement of its intent, the council refused to recognise laws and agreements signed “during occupation” and announced its plan to establish a technocratic, non-sectarian government.
The council pledged to “liberate” Iraq and “compel the occupiers to pay the relevant compensations to the Iraqi people”.
The statement also says the council will “establish good relations with other countries of the world” and “deal with international organisations according to the interests of Iraq and its people”.
Abdul Wahab al-Qassab, a strategic analyst, told Al Jazeera that the council had “opted for a national speech” that could bridge sectarian divides.
“When these factions decided to address the Iraqis, they chose a balanced language, away from bias for any sect,” he said.
But Adel Darwish, another political analyst, told Al Jazeera: “The negative point, of course, is that thay are rejecting the current government and they want to abolish any laws passed under the American occupation.
“That’s not going to go down well with the majority of Iraqis who actually elected this government – regardless of what we might think of the effectiveness of this government or the short-comings of the current prime minister.”
Alliance
US troops already have relations with a tribal alliance known as the Salahuddin Awakening Council, which has sided with them to combat al-Qaeda in Iraq.
But al-Jibouri criticised tribal alliances.
“Many reistance factions have committed mistakes in the course of their resistance to the occupation,” but he said, “this should never serve as a justification by the tribes to align themselves to the occupation forces.”
In September, Sheikh Abdul Sattar Abu Risha, one of the alliance leaders, was killed in a bomb attack near his home in Ramadi.
The newly-created council brings together six groups which have been involved in shifting alliances in the past.
The council is made up of four factions of the Jihad and Reform Front, alongside the Islamic Front for Iraqi Resistance, also known as JAMEH, and the Islamic Resistance Movement Hamas of Iraq.
Source : Al Jazeera 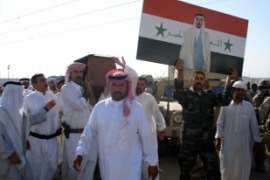 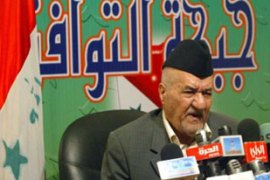 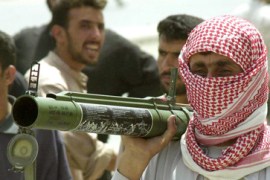